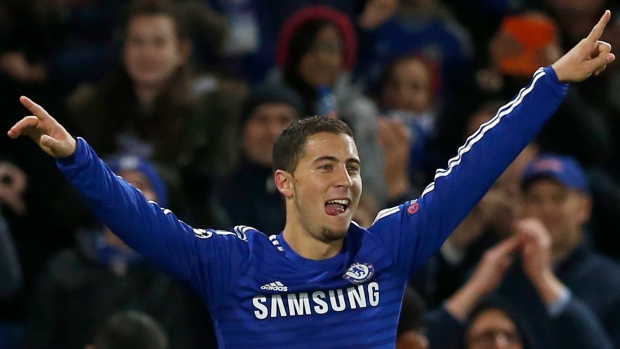 LONDON - Eden Hazard netted twice and Didier Drogba scored his first goal since returning to Chelsea in a comprehensive 6-0 victory over Maribor in the Champions League on Tuesday.

Hazard scored the last two goals against the Slovenian club, including one from the penalty spot, as Chelsea consolidated top spot in Group G in a ruthless manner.

Drogba's two-month search for a goal ended in the first half shortly after replacing Loic Remy, who sustained a groin injury while netting Chelsea's opener in the 13th minute.

Just like his last Chelsea goal — the winning strike in the 2012 Champions League final shootout — Drogba netted his 158th for the London club from the penalty spot.

"We scored two goals but we didn't stop, we continued to play," Drogba said. "We have a lot more quality than the previous (Chelsea) teams I played with, the team is younger."

The Premier League leaders' supremacy was never in doubt after captain John Terry scored his first goal in 13 months, and Maribor defender Mitja Viler inadvertently diverted Eden Hazard's ball into his own goal at the start of the second half.

Maribor squandered the chance of a consolation goal when Agim Ibraimi hit a penalty against the post, but Hazard did find the target from the spot before completing the rout in the 90th minute.

Chelsea remains two points ahead of Schalke, which clinched a 4-3 victory over Sporting Lisbon in stoppage time when Eric Choupo-Moting scored a penalty.

But Chelsea manager Jose Mourinho must now cope with Drogba as his only fit striker for Sunday's Premier League match at Manchester United, with Remy joining Diego Costa on the sidelines.

"We don't cry on injuries, it is our philosophy," Mourinho said. "One injury means an opportunity for somebody else."

On Tuesday that meant Remy started in place of Costa, who has a hamstring problem, and the France striker took just 13 minutes to score his first Champions League goal.

But there was no chance to score another after he sustained a groin injury that could keep him out for two weeks, allowing the 36-year-old Drogba to come off the bench.

Drogba, who is back at Chelsea on a season-long deal, had barely touched the ball when he extended Chelsea's lead from the penalty spot after Ales Mertelj handled Willian's low pass.

"I was surprised (and) not particularly pleased because I have my choices and my choice is Eden is the first-choice (penalty taker)," Mourinho said. "But because it was a goal, I am happy with that."

Terry took his chance, the centre back charging forward into an unusually advanced position to meet Cesc Fabregas' cross after Hazard had launched the counterattack.

Although Hazard had a low strike saved before half time, nine minutes into the second half the Belgium international's cross from a tight angle was turned in by Viler.

In a performance that deserved a goal, Hazard regained penalty taking duties from Drogba in the 77th after Branislav Ivanovic was fouled by Marko Suler.

Then Nathan Ake, the 19-year-old who replaced Fabregas to make his Champions League debut, sent the ball high over the top to Hazard, who twisted and turned before curling a shot into the net.

"Chelsea is a team that punished us very fast," Maribor coach Ante Simundza said through a translator. "The quality of their players was out of our reach."