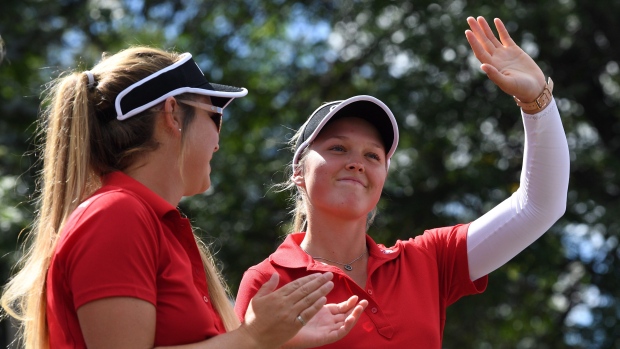 SMITHS FALLS, Ont. — Busloads of schoolchildren clad in red and white lined the paths of a local park in Brooke Henderson's hometown on Friday to celebrate the star Canadian golfer and her breakout season, which has seen her win her first LPGA major, surge in the world rankings and make an Olympic appearance.

Waving miniature Canadian flags, the kids strained to catch a glimpse of — or maybe even score a high-five from — the 18-year-old Smiths Falls star as the town held a party in her honour.

"To have everyone out, wearing red and white, there are a ton of people and it’s really cool. It’s an exciting day," said Henderson. "It means a lot to me that the town would do this for me and everybody would come out. I love coming back home."

Schools made schedule accommodations so kids could be there to properly welcome home Henderson and her sister Brittany, also a pro who now caddies for Brooke.

"She’s been a huge role model for us," said Lisa Drummond, a teacher at Lombardy Public School, where Henderson went as a youngster. "She’s so positive and has such a positive attitude. She’s easy to love."

Mayor Shawn Pankow said Henderson is an example for anyone who lives in the community of about 9,000, which has had its struggles in recent years with a high unemployment rate.

"We’ve had our challenges, but that is becoming part of our past. Brooke typifies the example of what hard work, dedication and commitment, combined with natural talent, can do," said Pankow. "If Brooke has that commitment and has had success, then anyone can do the same. She’s a real rallying point."

Henderson's season got off to a fine start, where she notched eight top-10 finishes in her first nine events. She's missed only one cut this year, and has won twice, including the KPMG Women’s PGA Championship, the first major of the year. She also defended her title at the Cambia Portland Classic and has risen to No. 3 in the world.

"It’s been a huge learning curve," she said of her season. "There’s been a ton of things I’ve learned about myself on and off the course. It looks good for the future because I’ve learned a lot, and I think I’ve gained a lot too."

Brittany said she was happy to be recognized alongside her sister.

"Sort of surreal actually," she said. "It’s kind of weird to see that everyone is here for Brooke and for me. It’s such a surreal feeling that people come out and support and it shows much they really care."

The last two weeks where the LPGA Tour was on Canadian soil, Henderson finished tied for 14th at the CP Women’s Open and tied for 39th at the Manulife LPGA Classic. She’ll now head to France for next week's Evian Championship, the final major of the season, before a lengthy swing through Asia.

"I feel like my game is in a really good spot," said Henderson, who turns 19 on Saturday. "Although I haven’t had the finishes I wanted the last two months I feel like it’s really close to being really good. I’m looking forward to France and the Asian swing. It’s been an awesome year and I just hope I can cap it off with another win or a few more top-10s."