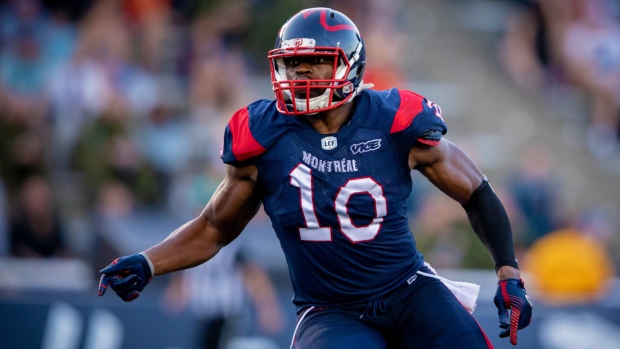 When Henoc Muamba left Mississauga, Ont., as a teenager for St. Francis Xavier University in Nova Scotia all those years ago, he didn’t understand his potential as a football player or how he might use his place in the game to help others.

On Tuesday, the 32-year-old linebacker demonstrated how he is excelling at both, announcing a free-agent deal with the Toronto Argonauts in front of a virtual audience of Mississauga high school students he was addressing as part of a new mentorship program.

The event marked Muamba’s official return home from a football journey that has taken him to Nova Scotia, Winnipeg, Indianapolis, Saskatchewan and Montreal.

“Being able to come home after the pandemic was an intriguing thought for sure because we lost my mother-in-law (Elizabeth Tweneboah) to COVID-19,” Muamba said. “That changed the dynamic in the house tremendously. Family is like a foundation for me … coming back is an essential decision for me.

“This is about more than money and more than football.”

At less than $100,000, the deal amounts to a hometown discount for the Argonauts, who add a player who has experienced it all during his career. Now he’ll get to spend a season at home with wife and two young daughters.

Muamba comes to the Double Blue as the league’s reigning Most Outstanding Canadian, a distinction he earned for his 2019 season spent anchoring the Montreal defence. He’s averaged more than 90 tackles over the past three CFL seasons, establishing himself as one of the league’s most impactful defensive players.

He also brings a reputation for leadership, both among his teammates and in the various communities in which he’s played throughout his career.

It’s something he began during his university days at St. Francis Xavier, where he arrived as a raw defensive back and quickly evolved into a dominating linebacker on a mostly struggling team.

“Try to be a leader to a team that loses seven games and only wins one,” he said. “So, I had to develop that, to find a way to say something that would tick for that person to play at the next level for the next game.”

He also got involved in mentorship while at St. Francis Xavier, helping turn the direction of a young boy who was struggling in his school environment. Muamba was so deeply touched by the experience that he continued to follow that path when he reached the CFL.

In Winnipeg, he participated in school breakfast programs and spoke to school groups as well as residents from a halfway house.

Those were transformative experiences for Muamba, as he shared his own story of being an immigrant kid from the Congo who learned a new language and a new sport in Canada.

“I remember going to the front of the room and it was like an out-of-body experience, and I was speaking from the heart,” he recalled. “I left there with my hands shaking and it was like, wow. That’s when I started to commit to things outside of football and doing more and more speaking.”

Muamba encourages his teammates to share their stories as well, serving as the interviewer for segments posted on team websites.

“I remember being in the locker room and looking at the guys around me and being like, it’s almost like it’s a prerequisite that you have gone through an immense amount of obstacle and adversity and overcame to find yourself in that room,” he said. “I would see it year after year.

“What’s the best way to bring those lessons to life and share them with the fans? I want to do a sit-down  [interview] with guys in the locker room and talk about football and the lessons they’ve learned.”

That led to the creation of his podcast, Muamba Moments, a series of sit-down interviews where the topics are as much about life as one’s accomplishments.

Argonaut general manager Pinball Clemons, a mentor to Muamba, was his very first guest on Muamba Moments when he began the podcast just over a year ago.

It was a fitting choice. Muamba and Clemons share the same outlook on the game and way it can be used to benefit the lives of those around them. For Muamba, that includes starting a foundation and pursuing plans to be involved in taking the game of football to youth in Africa.