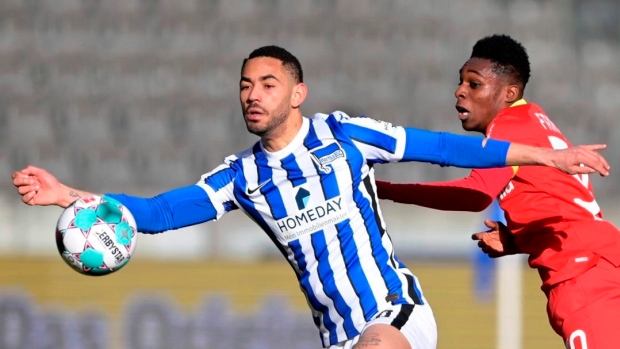 BERLIN — Hertha Berlin moved out of the Bundesliga relegation zone with a 3-0 win over Bayer Leverkusen on Sunday in what could be a final blow to coach Peter Bosz’s hopes of keeping his job.

Bosz, who has been in charge at Leverkusen since January 2019, has seen his team claim just four wins from 17 games this year, with 10 defeats including losses that knocked Leverkusen out of the Europa League and German Cup.

The latest defeat leaves Leverkusen sixth in the Bundesliga, seven points behind Eintracht Frankfurt in the last place for Champions League qualification.

Asked if he will still be in charge for Leverkusen’s next game against last-place Schalke, Bosz simply answered, “Yes.”

Hertha was under pressure for different reasons, especially after Mainz’s 2-1 win over Hoffenheim in the early game. It was the fifth win for Mainz in nine games, lifting Bo Svensson’s team out of the relegation zone.

Hertha started brightly, and Dodi Lukebakio cut the ball back for Deyovaisio Zeefuik to open the scoring in the fourth minute with a fine strike from the edge of the penalty area, going in off the far post.

Leverkusen pushed hard for an equalizer as Hertha sat back, with Patrik Schick missing a good chance for the visitors.

Then Matteo Guendouzi won the ball from Charles Aránguiz, and Lucas Tousart played a brilliant pass on the right for Lukebakio. He drew two defenders toward him before squaring the ball for Matheus Cunha. The Brazilian shrugged off a defender and fired past Lennart Grill in the Leverkusen goal in the 26th.

Hertha’s third came on another counterattack nine minutes later, when Guendouzi and Jhon Cordoba were blocked before the latter turned and shot through Grill’s legs. Cunha, Zeefuik and Lukebakio were all involved.

“If you want to win in soccer, you have to score goals and prevent goals. We didn’t manage either of those things well today,” Bosz said. “I’m very disappointed. The opponents’ first shot was in, the second and third, too. Then the game was almost over at halftime.”

Hertha’s goal jingle was playing again early in the second half, but Lukebakio’s score was ruled out through VAR as Cordoba used his arm to control the ball in the buildup.

The game continued in the same vein, with Leverkusen probing for a breakthrough, and Hertha sitting back to hit on the break.

Grill denied Cunha in a one-on-one before Lukebakio fired the rebound over. Leverkusen never got as close.

Hertha climbed to 14th in the 18-team division, ahead of Mainz on goal difference, and one point above Cologne which dropped into the relegation-promotion playoff place.

But Hertha coach Pál Dárdai was not celebrating.

“If we want to beat opponents like Bayer Leverkusen on a regular basis, then we have to do things better, especially in defence. I saw mistakes in the first half. Bayer could have made use of them, then it would have been 3-3 at the break,” Dárdai said.

Hertha next visits city rival Union Berlin for the derby on April. 4.

Freiburg beat Augsburg 2-0 in the late game to move to eighth.