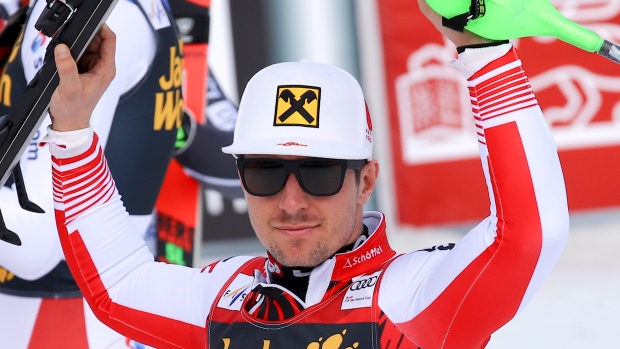 The Austrian holds an insurmountable lead of 509 points over second-place Alexis Pinturault of France with four events at next week's World Cup Finals remaining. A race win is worth 100 points.

Clinching the title was a formality for Hirscher as Pinturault is unlikely to start in Wednesday's downhill at the finals in Andorra, leaving the Frenchman with just three more races to score points.

Sunday's race was won by Ramon Zenhaeusern of Switzerland, while Pinturault finished seventh.

By winning the big crystal globe again, Hirscher has matched the World Cup record of 20 overall and discipline titles set by Lindsey Vonn.

Hirscher already held the record for most overall championships as no other skier, male or female, has won more than six in the 53-year history of the World Cup.

Hirscher locked up the discipline titles in slalom and giant slalom weeks ago.