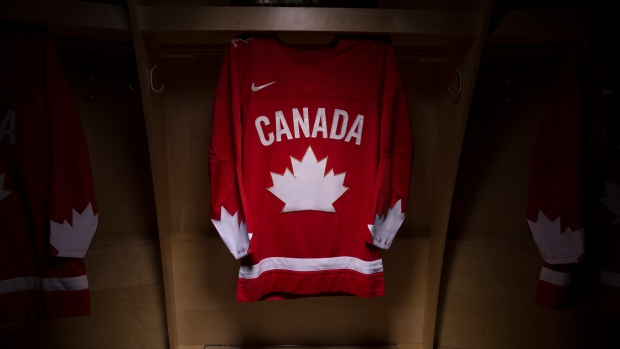 “This jersey is an updated look from classic Team Canada jerseys that have been worn during some of Canada’s most memorable moments, and represents the pride Canadians have in our heritage and the game of hockey,” said Tom Renney, chief executive officer of Hockey Canada. “Our partners at Nike have created a new design that fits in with the long line of historic Team Canada jerseys, and we know our players and fans alike will embrace the heritage jersey as part of Canada’s largest team.”

The jersey also prominently features Hockey Canada shoulder patches, as well as white maple leaves with CANADA inscribed along the inside bottom hem of the jersey. A gold maple leaf can be found inside the collar to signify Canada’s place in hockey history and achievements on the international stage.

“It’s always an honour for our players and staff to wear the Maple Leaf, but it’s even more special when you have the opportunity to wear a jersey that represents Canadian heritage,” said Scott Salmond, senior vice-president of national teams for Hockey Canada. “We know our athletes will be excited to wear the heritage jersey, and we look forward to seeing fans across the country cheering us on in their new Team Canada jerseys.”