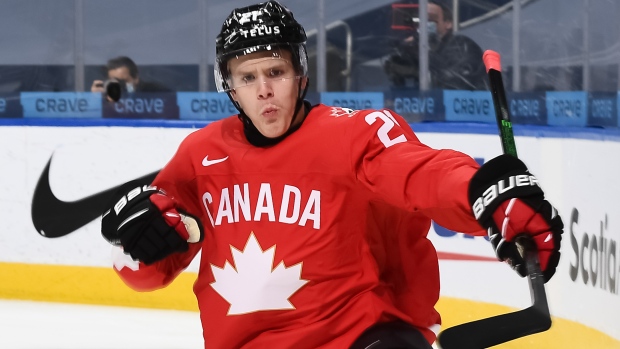 Hockey Canada has announced the 25-player roster that will represent the Red and White at the 2022 IIHF World Junior Championship in Edmonton and Red Deer, Alta.

Forwards Zach Dean, William Dufour, Luke Evangelista, Jack Finley, Hendrix Lapierre, Joshua Roy and Ryan Tverberg as well as defencemen Dameon Hunt and Vincent Iorio are among the final cuts after a selection camp that included two exhibition games against the U Sports All-Stars in Calgary.

Kingston Frontenacs centre Shane Wright, the frontrunner to go first overall in the 2022 NHL Draft, makes the roster as a 17-year-old after missing the cut in 2021.

Connor Bedard of the Regina Pats becomes the first 16-year-old since Connor McDavid to make the Canadian World Juniors roster after a standout camp.

“We are excited to unveil the 25 players who have earned the opportunity to represent Canada at the IIHF World Junior Championship, as we believe this group will give us the best chance to win a gold medal on home ice,” said director of player personnel Alan Millar. “We were impressed with the level of competition at camp, and we knew we were going to have to make difficult decisions when it came time to name a final roster. Our players and staff look forward the opportunity to compete in front of Canadian fans again, and we know this team will embrace the opportunity of wearing the Maple Leaf as we continue to build towards our goal of winning gold.”

The 2022 IIHF World Junior Championship begins on Boxing Day with Canada kicking off its tournament against the Czech Republic.