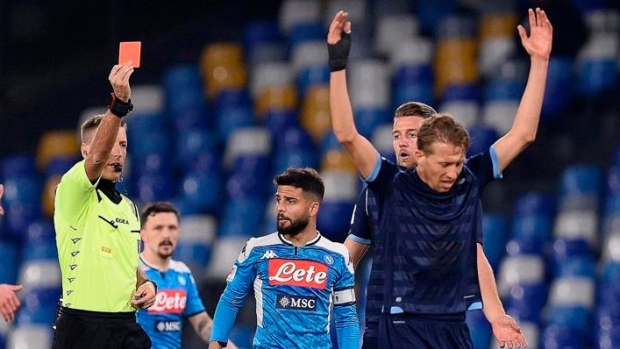 NAPLES, Italy — Defending champion Lazio was knocked out of the Italian Cup on Tuesday after a 1-0 loss at Napoli in a match which saw both teams have a player sent off in the first half.

Napoli will face Fiorentina or Inter Milan in the two-legged semifinals.

“We deserved more, we’re disappointed because we really held this competition dear,” Lazio coach Simone Inzaghi said. “Unfortunately we didn’t manage to turn things our way but I congratulated the guys for their performance."

Napoli has lost four of its past five Serie A matches since Gattuso took charge, while Lazio is on a club-record run of 11 successive league wins.

But it was the hosts who took the lead in the second minute, as Lorenzo Insigne beat a couple of Lazio players before firing in from a tight angle.

Lazio could have levelled seven minutes later from a penalty when Napoli defender Elseid Hysaj fouled Felipe Caicedo in the area but Ciro Immobile slipped as he was taking the spot kick.

Hysaj was booked in that incident and he was sent off in the 19th following another yellow card.

However, the two teams were back level in terms of numbers six minutes later when Lucas Leiva was sent off for dissent after being booked.

Lazio had two goals disallowed for offside while both teams also hit the woodwork.