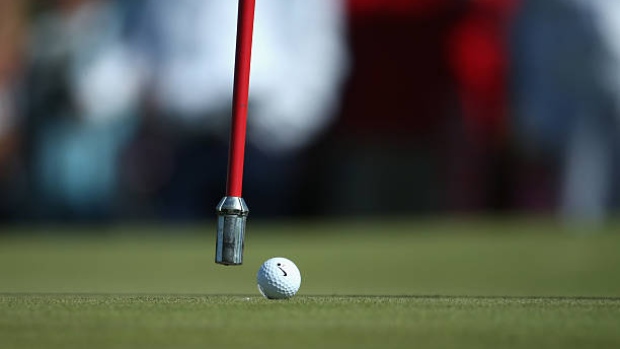 SPRUCE GROVE, Alberta — Thanks to a bunch of birdies, Ian Holt managed to drive ahead of the pack at PGA TOUR Canada’s ATB Classic presented by Volvo Edmonton. The former Kent State star entered Friday’s second round in a six-way tie for first.

The top of the leaderboard began to thin, especially after Holt went on a run of birdies on the back nine. He improved to 13-under on the day with birdies on the 11th, 13th, 14th, 15th and 16th holes, boosting his total for the round to seven when adding scores on No. 3 and No. 4 earlier. The burst left him two strokes ahead of Americans Rhett Rasmussen and Danny Walker at the midway mark.

Holt is optimistic about his chances.

“That’s why I’m here. I came here to win,” he said. “I feel good where I’m at right now, physically and mentally and I’m excited.”

The barrage of birdies on the back nine—five in six holes—put him alone in first.

“I just didn’t have a lot of opportunities on the front (nine). I just didn’t roll anything in,” Holt said. “And then I kept hitting it close on the back (nine) and got it to go in the hole.”
Holt, who was pleased with a par save on No. 12, noted that he started hitting it really well and throwing them in. He said his putter was kind of cold on the front and heated up on the back.

Thursday’s other leaders had a variety of success, or lack thereof, in the second round. Besides Rasmussen ending in a tie for second and Saunders slipping into a tie for seventh, there were much more dramatic slides. Brian Carlson and Cooper Musselman dropped to ties at 14th and 16th, respectively. John Duthie plunged to a tie at 36th, finishing at 5-under after shooting a 2-over 73.