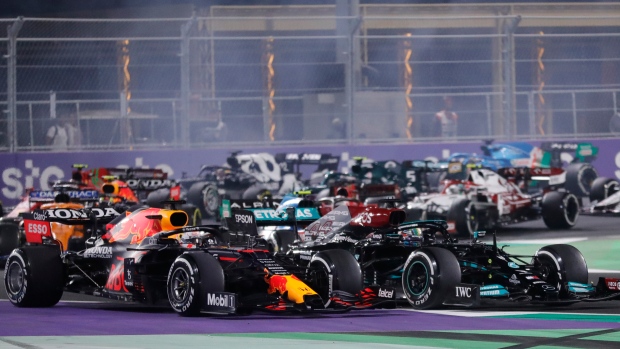 Though Max Verstappen owns the tiebreaker over Lewis Hamilton should both racers finish out of the points Sunday, Red Bull team principal Christian Horner said Wednesday that his driver has no intention of taking out Hamilton in Abu Dhabi.

Verstappen enters the final race of the Formula One season tied with Hamilton atop the standings for the drivers’ championship at 369.5 points. The Dutchman, however, has nine wins to Hamilton's eight this season, giving him the advantage in the event of a tie.

The 24-year-old is looking for his first career title, while Hamilton is trying to extend his streak to five straight championships and eight overall.

Hamilton closed the gap on Verstappen over the past two races despite being forced off the track in Brazil will attempting an overtake and a collision that was deemed to be Vertsappen's fault after he brake checked Hamilton in Saudi Arabia last weekend.

"To finish first, first you've got to finish," Horner added. "That's been our mantra throughout this season.

"Remember, it wasn't Max who crashed into Lewis at Silverstone. The stewards found Lewis guilty of driving into Max.

"They've both had their moments this year. Inevitably the reverse was found at Monza. They've been hard races.

"They've gone wheel to wheel. But I think, for all the fans, you want to see a fair and clean fight in this last round and may the best team and best driver win."

The race for the driver's championship is undecided entering the final week of the season for the first time since Nico Rosberg edged his then-teammate Hamilton for the title in 2016.