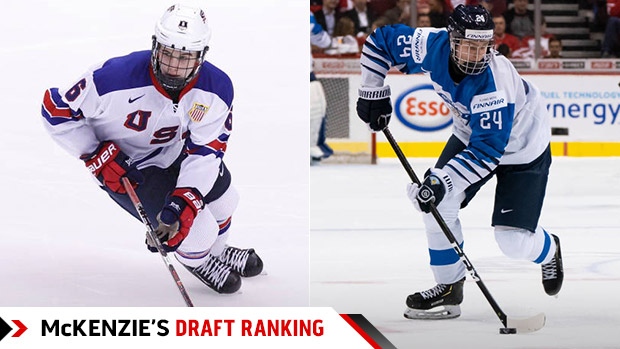 Appearances can be deceiving.

American Jack Hughes is the unanimous No. 1 pick. Ten out of 10 scouts surveyed by TSN this week — on the eve of next week’s (Tuesday, April 9) NHL Draft Lottery — put Hughes in the No. 1 slot, just as they did in TSN’s preseason rankings in September and midseason rankings in late January.

Well, not so fast.

Unanimity doesn’t allow for how close the race for No. 1 has become between Hughes, the 5-foot-10, 168-pound American centre, and 6-foot-2, 194-pound Finnish forward Kaapo Kakko, who is now the most prolific under-18 goal scorer (22 in 45 games played) ever in Finland’s top professional league (eclipsing Aleksander Barkov’s 21 goals in 53 games in 2012-13).

“The difference for us, right now, is razor thin,” said one NHL team head scout. “It’s almost a coin flip, pretty much a dead heat. Really close. Call it Hughes at 51 per cent, Kakko at 49 per cent. It’s that close and that could change.”

There’s still plenty of race to be run, too, as both players will be playing high-level international hockey in April and May.

Hughes will lead Team USA into the Under-18 World Championships in Sweden, April 18-28.

Ordinarily, Kakko would be playing for Finland, head to head against Hughes, at the U-18 tourney, but the big Finn has been named to the senior men’s team that will compete at the 2019 IIHF World Championship in Slovakia, May 10-26.

“It’s really too bad they’re not going head to head at U-18,” another NHL team head scout said. “That would have been a great measuring stick, a level playing field.”

Scouts will be eager to see if Hughes can dominate his peer group at the U-18. If Kakko plays well and produces against the men at the senior world championship, his stock could skyrocket. But the team picking first overall at this year’s draft won’t get the benefit of an apples-to-apples comparison at the U-18.

“No. 1 is still very much up for grabs,” said a third NHL team scout.

While Hughes at No. 1 was unanimous, so was the sentiment that a very wide gap to start the season has been closed considerably – to the point where it’s extremely close now.

That’s largely on the strength of Kakko’s strong play in the Finnish Elite League, but also a feeling amongst some scouts that perhaps Hughes hasn’t been as dominant as they thought he would be.

“They’re both really good players, probably not superstars,” another scout said. “Hughes could be Patrick Kane, but he might be Clayton Keller. Either way, a very good player. I don’t see Kakko as a superstar either. Very good player.”

Some scouts give Hughes, a natural centre, a slight edge based on position. While there’s talk that Kakko, who plays mostly wing but has played some in the middle, could project as an NHL pivot, the consensus of scouts surveyed by TSN is that he’s going to be a winger.

“Kakko’s game is from the top of the circles down with his size, strength and release,” one scout said. “Hughes’ skating and strength have increased significantly from last year and he has a real wow factor coming the neutral zone and offensive zone, making plays others don’t see.”

Hughes and Kakko are clearly the top two prospects in this year’s draft — like Hughes at No. 1, Kakko got 10 out of 10 votes at No. 2 — but Russian winger Vasili Podkolzin actually makes it more of a Big Three.

Eight of 10 scouts had Podkolzin at No. 3 and there appears to be some separation between the top three and the rest of the class. The only other two prospects who got any consideration as a top-three pick were Saskatoon Blades’ centre Kirby Dach and Lethbridge Hurricanes’ centre Dylan Cozens, each of whom got one vote at No. 3.

Dach is No. 4 on the TSN Draft Lottery Edition rankings, followed by Cozens at No. 5 and Vancouver Giants’ defenceman Bowen Byram at No. 6. Byram is the clear choice as the top defenceman in this draft.

If the margins between Hughes and Kakko at Nos. 1 and 2 were razor thin, so too were the differences between the top three Canadians in the draft. There is little separating Dach, Cozens and Byram at Nos. 4, 5 and 6.

Also worth noting, the top six prospects on TSN’s Draft Lottery rankings hold down the exact same positions they did in the midseason rankings at the end of January.

Centre Alex Turcotte, son of former NHL player Allie Turcotte, jumped from No. 11 at midseason to No. 7; centre Trevor Zegras moved up from No. 10 to No. 8; and scoring winger Matthew Boldy dropped from No. 7 to No. 9.

TSN’s Top 10 is rounded out by Swedish defenceman Philip Broberg, who was No. 8 at midseason.

The remainder of the Draft Lottery edition rankings is as follows: Swedish defenceman Victor Soderstrom checks in at No. 11, up from No. 17 on the midseason list; Kootenay Ice centre Peyton Krebs is No. 12, down from No. 9; Hamilton Bulldogs winger Arthur Kaliyev remained at No. 13; Mississauga Steelheads’ defenceman Thomas Harley is No. 14, up six slots from No. 20 and there’s a dead heat at No. 15 between U.S. U-18 defenceman Cam York (No. 15 at mid-season) and U.S. U-18 goaltender Spencer Knight (No. 19 at mid-season).

Some scouts believe Knight could be a franchise goaltender.

Two honourable mentions who didn’t quite make it to this 16-prospect list are U.S. U-18 goal-scoring machine Cole Caufield (No. 18 at midseason) and Finnish defenceman Ville Heinola, who was No. 24 at midseason.

Two players who dropped out of the Top 15 from midseason are Barrie Colts’ centre Ryan Suzuki (No. 12) and Halifax Moosehead winger Raphael Lavoie (No. 14).

TSN’s final draft rankings will be released the week of the NHL draft, which is June 21-22, in Vancouver.