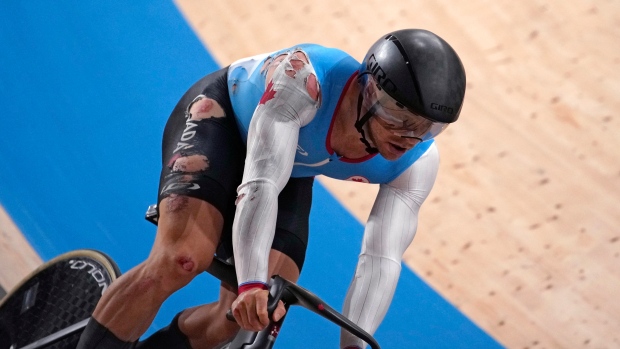 TOKYO — Canadian cyclist Hugo Barrette claims the Olympics were "stolen" from him after he was eliminated from the men's keirin in track cycling under controversial circumstances at the Tokyo Olympic Games on Saturday.

In a phone interview hours after his elimination, the 30-year-old cyclist said he was still overwhelmed by what happened.

“The Olympics were stolen from me,” Barrette said. “I would love to be able to say I’m over it, but I’m not. Decisions like this one happen too often.”

Sergey Ponomaryov of Kazakhstan and Muhammad Shah Firdaus Sahrom of Malaysia both crashed during the first round of the men's keirin race. The race was stopped after the crash.

After deliberations, cycling officials ruled the race needed to start over.

“At 100 meters from the finish line, at the speed we are going, the race is over,” Barrette said. “They saw that the British cyclist was not passing and they fired the rifle (signalling the end of the race). Their argument was that there was debris on the runway. But clearly, there wasn't any.”

“You never stop a keirin race. In fact, almost no race is stopped when there is an accident, ” he added.

Britain’s Jack Carlin was third behind Barrette and the Dutch rider Matthijs Büchli, who won the silver medal in the men's keirin at the Olympic Games in Rio de Janeiro and became 2019 UCI Track World Champion. Cycling officials gave Büchli a warning, judging he was responsible for the crash.

“The main reason there was a fall is that people wanted to come back at me,” Barrette said. “The guys weren't able, they panicked and fell. That's what happened.

“I have just done 750 meters in front of everyone and they tell me that we are starting the race over? I was stunned. In my head, I had won this race clearly and easily, with perfect execution”

“In the next round, I was the one who fell,” he continued. “But a Canadian, who cares? They could have run over me, when it's Canada, there is no problem. I am speechless."

When the race started over, raced by four instead of six, Barrette found himself trapped inside, but with room to move up the track. But Barrette fell heavily after coming into contact with Carlin.

"With two laps left to go, someone passed me and I followed his wheel," Barrette said. "There was Carlin, who was stuck outside, his race was over and I'm about to do the same thing (as in the first heat), but he comes to tackle me! He should have been disqualified, but Great Britain can get away with anything."

Büchli ended up received a yellow card on the streak. Instead of moving into the final heat, he was relegated to the repechage, where his Olympics Games ended.

“It wasn't Büchli," Barrette said. "We saw it on the slowed-down video, it's absolutely Carlin. The first fall too! The Dutch cyclist did not pass either, but the British guy is doing well. When you see the videos, there is no question. At the Olympics, aren't you able to stop for a minute to watch a video? It is terrible."

"The most important question is why did they stop the first race," Barrette questioned. "I was in front, the Dutch guy second and the British, third. They decided to resume racing, which never happens. It raises doubts."

Barrette had no energy left during the repechage, and in addition, he had a broken rib from his fall.

"I didn't know it when I was in the repechage, but when I started the race I was having trouble breathing," he said. "I feel a lot of disappointment, sadness, but with hindsight, frustration!"

"Keirin is my event. I was so well prepared and had been waiting for it for so long."

“I'm going to get over it, but this one is very difficult to swallow," Barrette said. "It is a decision that makes no sense."

“I have broken my back, some vertebrae, all the bones in my body. Yet, the time I had the most pain was because of this decision. It's as if someone told me we don't want you to win and we can do whatever we want. It's tough on the spirit. The only good thing is that my girlfriend, Kelsey (Mitchell), is going to the semifinals. I was happy for her."

Mitchell, of Sherwood Park, Alta., reached the women's sprint semifinals after she defeated Lauriane Genest, of Lévis, Que., who won bronze in the keirin earlier this week.

This report by The Canadian Press was first published on Aug. 7, 2021