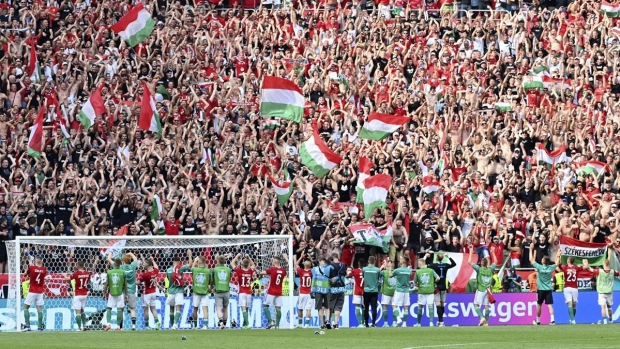 LONDON (AP) — Hungary was ordered by FIFA on Tuesday to play its next World Cup qualifier without spectators as punishment for the latest racial abuse by its supporters when England played in Budapest.

The Hungarian federation was also fined 200,000 Swiss francs ($217,000), one of the largest financial penalties handed out to a country by the world governing body.

In a sign of a systemic problem with racism from Hungarian fans, the punishment extends their run of games in empty stadiums because of racism in qualifiers for the 2014 and 2022 World Cups and Euro 2016.

The team will have to play another FIFA match without a crowd if there are future incidents of abuse, with the second match of the punishment being suspended for a probationary period of two years.

Hungary's Sept. 2 match against England in Budapest would already have been played without spectators had FIFA been asked to implement a UEFA punishment for discriminatory abuse during European Championship matches. That two-game ban on spectators will take effect next June during the Nations League.

But Hungary will have to host Albania on Oct. 9 in an empty stadium in its next World Cup qualifier.

FIFA's disciplinary committee ruled there had been “racist behaviour of numerous supporters” during the England match this month that was played in front of a crowd of almost 60,000 at Puskas Arena. Monkey chants were aimed at England forward Raheem Sterling and unused substitute Jude Bellingham, who are Black.

“After analysing and taking into consideration all the circumstances of the case, specifically the seriousness of the incidents (racist words and actions, throwing of objects, lighting of fireworks, blocked stairways)," FIFA said, “the committee decided that (Hungary) would play its next two home matches in FIFA competitions without spectators, the second match being suspended for a probationary period of two years.”