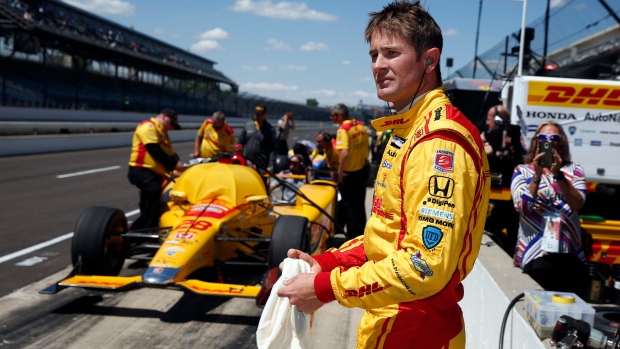 INDIANAPOLIS — Ryan Hunter-Reay returned to the top of the IndyCar world Wednesday.

"Coming off the year we had here last year when we couldn't get the car to do anything we wanted it too, it's nice to be back on top," Hunter-Reay said. "It's been a fun day, a challenging one at times when that wind spins you around, it's a big change. But I liked what I had at the end."

It was a busy day as all 33 car-driver combinations participated, and in the final half-hour there were so many cars still on the track that it resembled a race-day scene.

How much of an edge Andretti's Honda-powered cars have over everyone else remains unclear.

Marco Andretti had the best speed Monday with the next three spots going to his teammates. Tuesday's practice was washed out by rain, and the Andretti drivers took four of the top 10 spots Wednesday.

But the two teams that have dominated the early portion of the season — Chip Ganassi Racing and Team Penske — spent most of the practice playing catch-up.

Only four of the top 10 were Chevrolets.

"These cars have a little bit of a different aero configuration and it's going to be interesting," Power said of Chevys. "It's not going to be like last year, where we had an advantage."

But with qualifying set for Saturday and Sunday and the 100th running of the Indianapolis 500 scheduled for May 29, Hunter-Reay expects the gap to close quickly.

"I fully expect things to come a little bit more into the norm by the time we get to Friday," Hunter-Reay said. "Some of those Chevys look really good in traffic."

WHO'S NOT: Spencer Pigot. After his best lap of the day, 223.667, the American rookie, spun going through the first turn and slammed hard into the outside wall. Pigot was helped out of the car, checked and released from the infield medical centre but did not make it back onto the track.

GETTING THE BOOT: Colts punter Pat McAfee is jumping into the racing world. Dale Coyne Racing announced Wednesday that McAfee and ShirtsForAmerica.com have become the primary sponsor for Conor Daly's No. 18 car. Proceeds from T-shirt sales will be donated Wish For Our Heroes, a charity that helps struggling military veterans cope with everyday situations, and The Pat McAfee Foundation, which has awarded more than $150,000 in scholarships to children from military families over the past four years.

EARLY BIRDS: With reserved seating sold out for a race day and a crowd topping 300,000 expected May 29, race organizers are encouraging fans to arrive early. They've even put together some early race-day events. The speedway's museum, an enhanced Midway and concession stands will open at 6 a.m. ESPN's SportsCenter will tape two segments from Pagoda Plaza, and the Borg-Warner Trophy will leave the museum at 8 a.m. before being taken to the Yard of Bricks.

UP NEXT: A six-hour practice session is scheduled Thursday.