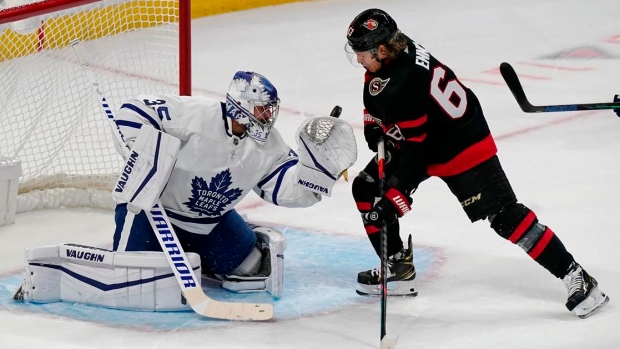 Petr Mrazek was on the ice for the Leafs' skate on Tuesday. The 29-year-old netminder started for the Marlies on Sunday as part of a conditioning stint.

Petr Mrazek on the ice at Leafs skate

Mrazek, who signed a three-year deal with the Leafs in July, is 1-1 with a 4.20 goals-against average and .877 save percentage in two appearances this season.

Forward Joey Anderson has been loaned to the Marlies.

Neal Pionk has entered concussion protocol. The defenceman was handed a two-game suspension on Monday for kneeing Sandin in Sunday's game against the Leafs.

Neal Pionk, who is suspended for the next two #NHLJets games, is in concussion protocol and will not travel with the team on their road trip later this week. #TSN @TSN_Edge

Jason Spezza is awaiting a hearing for subsequently kneeing Pionk in the same contest.

Defenceman Mattias Norlinder is being loaned to the Laval Rocket of the AHL, while blueliner Corey Schueneman was recalled from the Rocket in a corresponding move, the Canadiens announced on Tuesday.

The Canadiens have loaned defenseman Mattias Norlinder to the AHL’s Laval Rocket, and have recalled defenseman Corey Schueneman.

The Oilers announced that Devin Shore has been activated from injured reserve. The 27-year-old centre from Ajax, Ont., has played in eight games this season with one goal and one assist.

Devin Shore has been activated from Injured Reserve & Brendan Perlini has been placed on waivers. #LetsGoOilers pic.twitter.com/nbiX7xz70n

The Lightning made a pair of moves ahead of their matchup at the Bell Centre, recalling defenceman Fredrik Claesson from the Syracuse Crunch and assigning Alex Barré-Boulet to the AHL affiliate.

We have recalled defenseman Fredrik Claesson from the @SyracuseCrunch.

Additionally, the team has reassigned forward Alex Barré-Boulet to the Crunch.https://t.co/sfL074vuSM

Ben Bishop is headed to the AHL on a conditioning stint and could suit up for the Texas Stars this week.

We have loaned goaltender Ben Bishop to the @TexasStars, on a conditioning assignment.

Bishop, 35, hasn't played for 14 months since undergoing knee surgery. The goalie has played in 413 NHL games with a 2.32 goals-against average and .921 save percentage.

Centre Robert Thomas will be out of the Blues' lineup tonight against the Florida Panthers. St. Louis will play one skater short for cap reasons. The Blues can return to a full lineup on Thursday against the Detroit Red Wings.

Berube confirms Thomas is out tonight against Florida and the Blues will play one skater short (10F, 7D) due to cap reasons.

After playing shorthanded for the one-game requirement, they'll be able to use the emergency rule to call up a player Thursday vs. Detroit. #stlblues

Thomas, from Aurora, Ont., has two goals and 20 assists in 24 games this season.

Kevin Connaughton was claimed off waivers from the Panthers. The veteran defenceman, 31, played 13 games for Florida, most recently on Dec. 4.

Head coach Andrew Brunette indicated that centre Aleksander Barkov and defenceman Gustav Forsling will both return to the lineup against the Blues.

Coach Brunette says both Aleksander Barkov and Gustav Forsling will return to the lineup tonight against St. Louis.

Spencer Knight will be in net. #FLAvsSTL

Barkov hasn't played since Nov. 16, while Forsling has been out since Nov. 27.