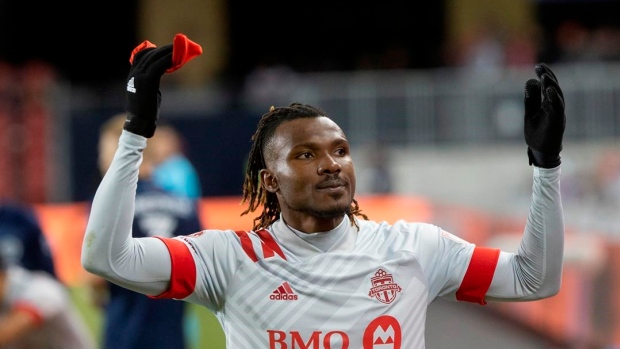 The 23-year-old forward took the field for the first time in 515 days when he came off the bench in Toronto FC's 3-0 loss in Philadelphia on Wednesday night.

Back home in Nigeria, his family was watching.

"They were really excited to watch last night," he said Thursday. "My mom especially. She was like 'Just be careful.' She's all loving and sweet."

"He has worked so hard behind the scenes to get himself back in a position where he was able to be ready to step on the field tonight," captain Michael Bradley said after the game. "He's a great young man. The way that he injured himself last year broke everyone's heart at the club."

"We're all happy for him, we're all proud of him," he added. "And we want to continue to push him along because he's a talented young player."

Achara's return was one of the few positives for interim head coach Javier Perez on a night when his club's five--game undefeated run was snapped.

It was Achara's first match since his MLS debut March 7, 2020, when he scored the winner in TFC's home opener against New York City FC. Coincidentally NYCFC visits BMO Field on Saturday when Achara could make his home return.

Achara's injury followed a breakthrough 2020 pre-season for the Nigerian-born rookie from Georgetown University, taken in the first round (25th overall) of the 2020 MLS SuperDraft.

Despite missing the opening potion of camp in Orlando due to illness, he turned heads in the next segment in California, scoring goals against UC Irvine, Los Angeles FC and the Los Angeles Galaxy.

Then-coach Greg Vanney said the young forward had wasted little time proving he was "goal-dangerous in every game.''

While unable to take part in Toronto’s 2020 season opener in San Jose on Feb. 29 because of red tape, he scored the next week to give TFC the win in its home opener.

MLS went into lockdown after that game, suspending the season until the July MLS is Back Tournament in Florida.

Achara found himself stuck in a highrise near the team's north Toronto training facility. Looking to make the best of the situation, he was featured in a TFC workout video hefting cans of tomatoes as makeshift weights.

Disaster struck after TFC reconvened to prepare for the Orlando tournament.

Achara injured his knee in training May 26 at BMO Field when he became tangled with six-foot-five defender Omar Gonzalez while they attempted to get to a cross. It was one of the last plays of Toronto’s first team training session at its home stadium since the lockdown.

Achara underwent surgery July 7 to repair a torn anterior cruciate ligament and lateral collateral ligament in his left knee. The rookie was done for the 2020 season.

While the team resumed play in Florida first at the MLS is Back Tournament and then in its pandemic East Hartford home, Achara remained in Toronto -- a new city, away from friends and family -- working on his knee.

"It wasn't a great time to have that major injury and be away from home," he said. "It wasn't easy at all."

But he says the experience has left him mentally stronger. And he is grateful for the help he got from the club with head athletic therapist Carmelo Lobue and then assistant athletic therapist Shohei Miyauchi working with him closely during his rehab.

"They've been really taking care of me," he said.

He went down to Orlando with the rest of the players and staff this year, and was cleared to train with the first team in the second week in July.

"I told myself I'm just going to practice and not have any expectations of games. Because if I can play really well in practice then I'm pretty sure I can slowly make my way into the team."

Born in Enugu, Nigeria, a young Achara drew the attention of the Nigerian under-17 team as a right back.

He failed to make the cut for the U-17 World Cup but thanks to the MTN Football Scholar program - which connect coaches to young African talent - he drew the attention of Jon Moodey, then-soccer coach at Berkshire School in Sheffield, Mass. TFC winger Jacob Shaffelburg and Jack Harrison, a former New York City FC midfielder who now plays for Leeds United, also went there.

Achara passed the necessary academic tests and headed to the U.S. at age 16.