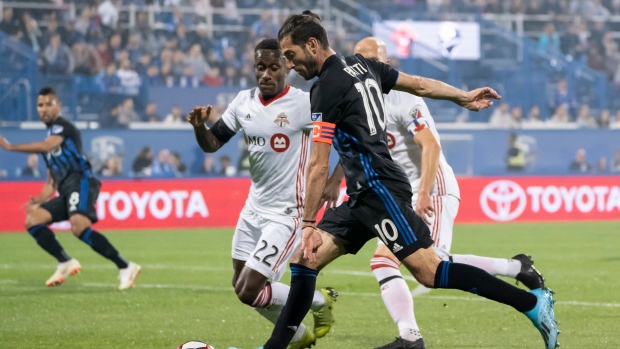 MONTREAL — The struggling Montreal Impact felt like a weight was lifted off their shoulders after a win in the first leg of the Canadian Championship final.

Captain Ignacio Piatti's impressive strike gave the Impact a 1-0 victory over rivals Toronto FC on Wednesday night in the teams' quest for the Voyageurs Cup.

Montreal's awful 2-9-1 slump in Major League Soccer has it on the verge of missing the playoffs for the third consecutive season, making the domestic tournament all the more important.

"We were in a bad stretch and we knew this was a golden opportunity," said midfielder Samuel Piette. "This was a chance to show that the players and the organization have not thrown in the towel.

"We hope the performance and result today proves we still want to win despite the recent results."

The victory puts Montreal in a decent position heading into next Wednesday's return leg at Toronto's BMO Field. The winner of the home and away aggregate series will represent Canada in next year's CONCACAF Champions League.

Because Montreal did not concede an all-important away goal, Wilmer Cabrera's men need a win, a draw, or a one-goal defeat in which they score a goal in the second leg in order to hoist the franchise's fourth Voyageurs Cup.

"We were very organized, we were very solid," said Cabrera, who improved to 2-3-0 as Impact coach. "We didn't make too many silly mistakes. The fact that we cut those mistakes out allowed our players to be more comfortable with the ball."

It is the third meeting between Toronto and Montreal in a Canadian Championship final, with each team winning once before.

The three-time defending Canadian champs Toronto FC came into the game full of confidence riding a nine-game unbeaten run in all competitions (5-0-4).

But it was the home team that completely dominated the first half of play at Saputo Stadium, and much of the second.

Chance after chance came to nothing in the first quarter hour until Piatti got the breakthrough from distance in the 17th minute. The Argentine, fully recovered from a recent adductor injury, one-touched a ball from Saphir Taider and fired a rocket into the back of the net from 25 yards out.

Toronto's only real opportunity of the half belonged to Jacob Shaffelburg, from Port Williams, N.S., whose volley from inside the penalty area required Clement Diop to make a dramatic one-handed outstretched save — one of four stops for the Impact backup goalkeeper.

Looking for that away goal, TFC coach Greg Vanney added firepower for the second half, subbing leading scorers Alejandro Pozuelo and Jozy Altidore into the game.

"Our losses of possession were deadly for us in the first half," said Vanney, whose team plays LAFC on Saturday. "Too many straight passes and they were jumping on them. It was setting off their transitions, which is always something they've been good at. For us, it was getting that organized.

"We wanted to get a goal and we didn't. But 1-0 is doable for us. It didn't get away from us tonight. Now we go home and we know what we have to do."

The visitors controlled more of the ball in the second half but Montreal came closest to scoring again.

A wide-open Piatti nearly got on the end of a Taider free kick in the box in the 52nd minute. On the very next play, winger Lassi Lappalainen lobbed a ball over 'keeper Alex Bono from a few yards out but his shot went just wide.

Montreal is now undefeated at home in the Canadian Championship in 14 consecutive matches (9-0-5) dating back to April 2011.

"We really put ourselves in a good position for Wednesday," said Piette. "I was excited to play today, and I'm even more excited for the second leg following today's result. Honestly, I just want to lift that trophy over my head on Wednesday in Toronto."

The win came at a cost for the Impact, though. Bojan left the game in the first half with an undisclosed injury. Taider was shown a yellow card and will miss the return leg due to card accumulation.

The Impact, who last won the Voyageurs Cup in 2014, advanced to the final by defeating Calgary's Cavalry FC 3-1 on aggregate in the semifinal while Toronto easily downed the Ottawa Fury 5-0.

Notes: Canadian tennis star Bianca Andreescu was in attendance at Saputo Stadium, where there was a total 10,803 fans. … Toronto has lifted the Voyageurs Cup a record seven times.