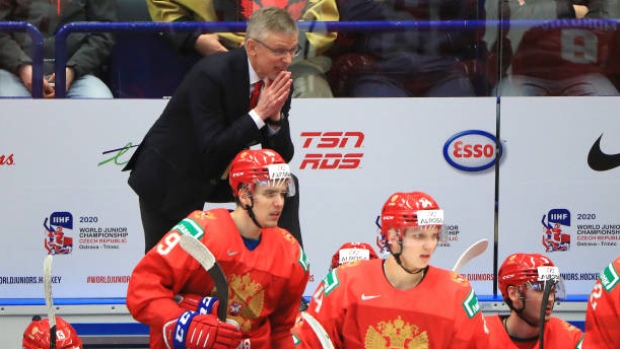 The Russian Ice Hockey Federation has announced it has shuffled its coaches with Igor Larionov replacing Valeri Bragin as head coach of the U20 team and Bragin taking over the men's national team from Alexei Kudashov.

Bragin will be assisted by Alexei Zhamnov, Andrei Kozyrev and Alexander Boikov with Rashit Davydov as the goalie coach. In eight years as coach of the U20 team, Russia won seven medals under Bragin, including gold in 2011.

“To be the head coach of the national team is a great honour and responsibility. A big thank you for the trust of the federation’s leadership,” Bragin said in a statement.

Larionov, a Triple Gold member and IIHF Hall of Famer, was an assistant to Bragin at the 2020 World Junior Championship where the Russians earned silver.

“This appointment is a great honour for me,” said Larionov. “The task of replacing a coach such as Valeri Bragin, who headed the U20 national team for many years, is very difficult. I wish Valeri Nikolayevich [Bragin] good luck as head coach of the men’s national team.

“A difficult task gives me additional energy. We have many good players who are on the radar of the U20 national team. I see that our team has very big potential. I have gained tremendous experience in the past World Juniors, I am optimistic about entering a new position and want to help our hockey become a leader on the world stage.”

He will be assisted by Sergei Golubovich and Vladimir Filatov with former NHL goaltender Nikolai Khabibulin as the goalie coach.