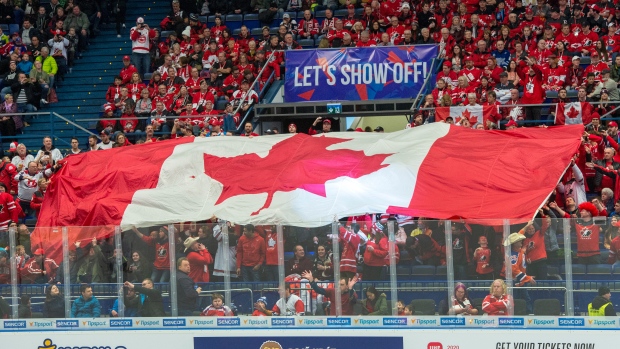 EDMONTON — A decision has yet to be made on whether the 2021 world junior men's hockey championship in Edmonton and Red Deer, Alta., will be played with or without fans.

The International Ice Hockey Federation's council will meet later this month to review the status of all tournaments in 2020-21, according to an IIHF spokesman.

Council will hear recommendations and updates from the IIHF's COVID-19 expert group and host cities.

The 10-country world junior tournament scheduled for Dec. 26 to Jan. 5 at Rogers Place in Edmonton and Westerner Park in Red Deer features the top under-20 players in the world.

"At present time, there has been no change to the traditional hosting model for the 2021 IIHF World Junior Championship in Edmonton and Red Deer," Hockey Canada said Tuesday in a statement.

"Hockey Canada continues to engage in daily communication with the IIHF, the host communities of Edmonton and Red Deer, and the appropriate health authorities to examine all options for hosting the world junior championship in December and January.

"The health and safety of all participants and the community at large remains a priority for Hockey Canada, and our organization will continue to work towards hosting a safe, successful event on behalf of the IIHF."

Edmonton and Toronto are currently hub cities for NHL playoffs. That league intends to complete the 2019-20 season interrupted for four months by the pandemic.

Players, coaches and team staff are walled off from the general public in hotels and arenas. Edmonton will host the Stanley Cup final.

No one in the "secure zones" have tested positive for the virus so far, according to the NHL.

"Given the current COVID-19 situation within Canada, together with the bubble measures that have been implemented very successfully by the NHL so far in Edmonton and Toronto, there could be discussions surrounding the feasibility of holding the world juniors in a similar environment," the IIHF's Adam Steiss told The Canadian Press in an email Tuesday.

"The health and safety of players, coaches, officials, arena staff, and fans remains a top priority."

This report by The Canadian Press was first published Sept. 1, 2020.