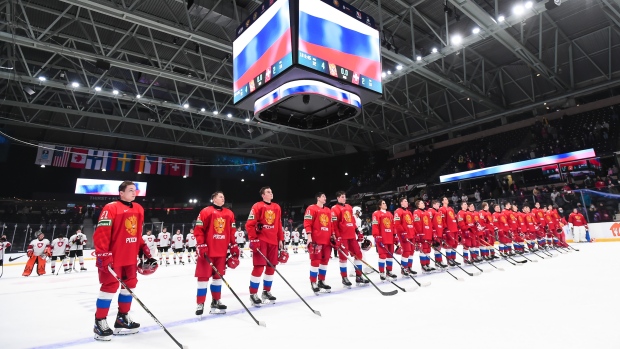 International sport federations barring Russia from events in response to its invasion of Ukraine means Russians will likely not compete in March's women's world curling championship in Prince George, B.C., or the world under-20 men's hockey championship in Alberta in August.

"I 100 per cent believe until Russia, the aggressor in this war, and anyone supporting Russia and the invasion and the killing of innocent people, until that stops Russia has no place in the Olympic movement, which is about peace and the world working together," Wickenheiser told The Canadian Press on Monday.
"I think they need to ban Russia, Belarus."

Just over a week after the close of the 2022 Winter Olympics in Beijing, the IOC recommended Monday that Russian and Belarusian athletes and officials be excluded from competition by international sport federations.

Wickenheiser, who capped her eight-year term on the IOC's athletes' commission this year, says that edict lacks teeth as has the IOC's handling of Russia's doping scandal since 2014.

"Unfortunately, I've witnessed this dance with Russia for eight years. It's always appeasement," she said. "There's never harsh enough sanctions taken and it's time for that."

FIFA, the International Ice Hockey Federation and the World Curling Federation were among the world sport bodies moving against Russia and Belarus on Monday, with Canada's domestic bodies following suit.

The IIHF suspending Russia and Belarus from tournaments in every age category removes perennial contender Russia from the rescheduled men's world junior championship in Alberta this summer.

The 2022 junior tournament in Edmonton and Red Deer was called off Dec. 30 after four days because of a COVID-19 outbreak. The IIHF also stripped Russia of hosting the 2023 world junior championship.

"Hockey Canada supports the decision by the International Ice Hockey Federation (IIHF) to suspend Belarus and Russia from international competition," Canada's governing body of hockey said in a statement.

"Hockey Canada has also made the decision not to allow their participation in events held in Canada that do not fall under the IIHF's jurisdiction."

The World Curling Federation amended its rules with the intention of kicking Russia out of upcoming world championships, including the 13-country women's tournament March 19-27 in Prince George.

If more than 10 per cent of its member countries object in a three-day span, however, the amendment isn't immediate and gets punted to the next WCF assembly.

The Russians had yet to declare a representative team for Prince George. Curling Canada doesn't want them there now.

"The invasion of Ukraine, a democracy, and an important member of our World Curling membership, must be met with swift and assertive sanctions that makes a strong statement of our collective values, our ethical stance, and, first and foremost, demonstrates concern for the safety and the freedoms of the people of Ukraine," Curling Canada said in a statement.

"We also urge the WCF to continue working toward addressing longstanding, serious concerns that we and other member nations have raised about the culture of sport in Russia. These concerns must be dealt with in order to ensure a level playing field for all athletes, and to remain true to the spirit of curling."

FIFA, under considerable pressure when Poland, Sweden and the Czech Republic refused to play World Cup qualifiers against Russia, suspended the latter country Monday. Canada joined in the condemnation.

"In steadfast support of Ukraine, its people and Ukrainian Canadians who represent the third largest Ukrainian population outside of Ukraine and Russia, Canada Soccer, its member associations and clubs will not compete at any level against Russia until sovereignty and territorial integrity are restored," Canada Soccer said in a statement.

"We wholeheartedly condemn the hostile attack on Ukraine by Russia and stand united with Ukrainians here in Canada and around the globe."

Wickenheiser was among more than a dozen Canadian athletes alongside Clara Hughes, Beckie Scott and Kyle Shewfelt signing a Global Athlete letter to IOC and IPC presidents Thomas Bach and Andrew Parsons demanding the removal of Russia and Belarus.

A Hockey Hall of Famer and four-time Olympic gold medallist, Wickenheiser wasn't optimistic about the IOC's willingness to eject Russia and Belarus.

"To this day, in everything I've seen, I don't feel there's the courage and the strength to do it," she said. "However, I believe that they have the ability to do it if there's enough will and pressure from inside.

"It will come down to what the membership of the IOC believes and feels and how much pressure they can put on Bach to make the decision.

"I'd like to think there's enough humanity in the IOC that they would do this, but I've also seen politics and money, those things have won out over doing the right thing, particularly when it comes to Russia over the years. It's just so blatantly obvious."

This report by The Canadian Press was first published Feb. 28, 2022.