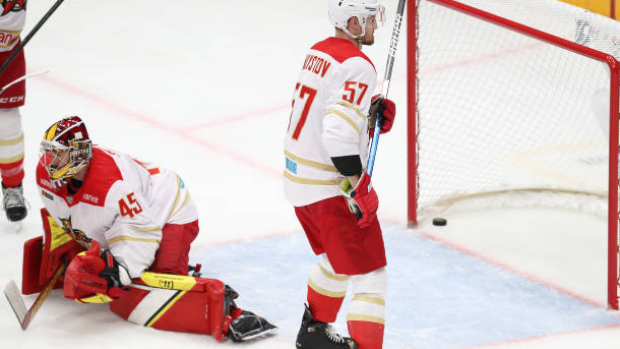 The status of the Chinese men's hockey team appears to be back in doubt for the 2022 Winter Olympics in Beijing.

International Ice Hockey Federation president Luc Tardif said on Nov. 3 the team would compete, but the federation is set to hold another review after witnessing the Kunlun Red Stars, who are being used as a proxy for the national team, lose two more games in the KHL last week.

"The fate of China’s men’s Olympic entry hangs in the balance as the IIHF prepares to talk on Friday, they have a scheduled call," TSN Hockey Insider Chris Johnston said on Insider Trading Tuesday. "This has been a situation they’ve been monitoring closely. There’s been concerns the Chinese men’s team might not be competitive enough to play in these Games.

"Essentially on that call on Friday the IIHF will review two test games the Chinese team played last week in the KHL, they lost both, and decide whether to make a recommendation to the International Olympic Committee to replace China for those games with Norway, or to go ahead with the plan as it is.

"Remember, China is going to play Team USA and Team Canada if it remains status quo, and so there’s some concern that those could be lopsided scores if that ends up happening."

The Red Stars, who are 8-23 in the KHL this season, suffered a 5-4 overtime loss to Amur Khabarovsk last week in front of a team of IIHF officials and then fell 4-1 to Avangard Omsk two days later.

The team has several North American-born players on their roster who have taken Chinese nationality, including Jake Chelios, son of Hockey Hall of Fame defenceman Chris Chelios.

The Chinese men's national hockey team, which has never competed at the Olympic level, is currently scheduled to face the United States in their first game in Beijing on Feb. 10.