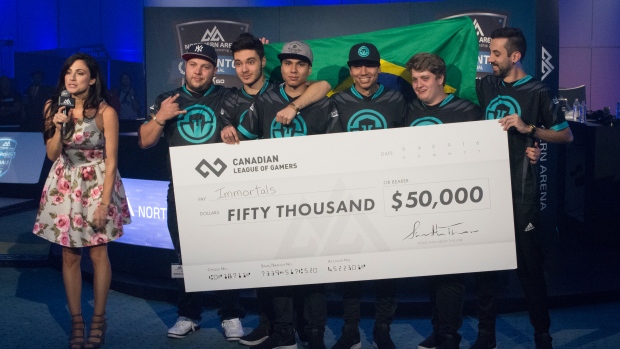 "We’re the champions of our first LAN with a three-week lineup," Prado told TSN.ca.

Cloud9’s decision to open the series on the terrorist side burned them early as Immortals jumped out to a 4-1 lead. But the American squad battled through to win eight of the next 10 rounds to go into halftime up 9-6.

The slow start plagued Cloud9 again and Immortals clawed back in the second half and took the lead on their own terrorist side with five straight rounds. The Brazilians took nine of 12 rounds total to take the series lead with a 16-12 win.

"We were able to dominate them pretty well and impose our rhythm," zews said. "We started to let the game go a bit but on T side I was able to have some really good strats and my players were hitting all their shots and we were able to dominant them."

Cloud9 looked much more comfortable to open the second map on Train, but couldn’t maintain momentum for more than a few rounds at a time. After winning the first four rounds on their map pick, Cloud9 could only muster another two on the terrorist side to go into the half down 9-6.

Down 11-7 in the second half, Cloud9 turned the tables on the counter-terrorist side and took control of the map with seven straight round wins.

"Honestly we won the second map because a lot of individuals stepped up, Tyler, Stewie, everyone stepped up individually. Our teamwork was still lacking but we made up for it," Timothy "autimatic" Ta said.

"We were just trying to forget about the first map and being able to still win it was what we were focused on."

With Immortals up 3-0 in the third map on Overpass, a bit of controversy forced an early delay. One of the Immortals players was not wearing his headset during gameplay and the match was put on hold for almost half an hour to decide whether to restart or continue.

In the end, administrators decided to continue the round but stripped Immortals of the round they won when the infraction was caught, leaving the score at 2-0 at the restart.

Cloud9 had new life out of the break and took six straight rounds before Immortals responded. They went into the half with a 9-6 lead.

"We were really hyped up the way we came in," zews said. "The break affected us but it affected Cloud9 too so there’s nothing to say. It was the same for both."

The lead was quickly turned into a deficit as Immortals won five straight rounds to open the second half. Immortals gave up just two of the last 12 rounds to take home the Northern Arena title.