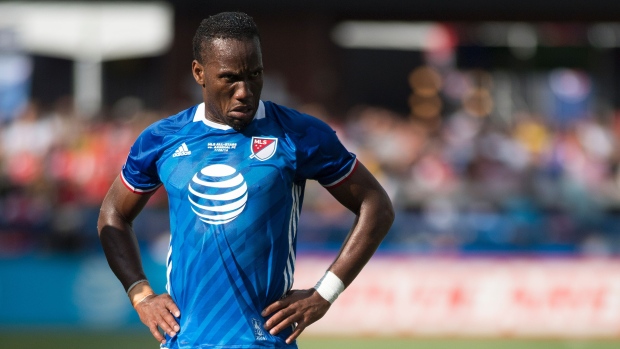 MONTREAL — Didier Drogba made a brief appearance at the Montreal Impact's practice on Tuesday but is unlikely to play in a playoff game this week against D.C. United.

Drogba, who the team reports has been nursing a sore back, came out of the clubhouse an hour into practice with a scarf covering all his face but his eyes due to the cold. He jogged with a trainer for about 15 minutes soccer before going back in.

Other than a friendly "hello" as he walked past, he did not speak to the media.

Coach Mauro Biello does not expect the former Chelsea star to play when the Impact travel to D.C. United for an MLS single-game knockout match on Thursday night, which will end the club's season if they lose.

"I don't think the chances will be good," said Biello. "He hasn't trained.

"He still feels discomfort, so the chances are very minimal."

There has been much debate on whether it is the injury or a dispute with Biello that has kept Drogba off the field in recent matches.

The 38-year-old did not show up for a match against Toronto FC on Oct. 16 after asking to be taken out of the lineup when told he would not be in the starting 11 for a third game in a row. He was fined an undisclosed amount by the league for being absent without permission.

Drogba returned the next day after agreeing to abide by the coaches' decisions, club president Joey Saputo said.

Most of the team's top players did not take part in the final regular season match Sunday at New England, although Drogba would have been unlikely to play because it was on artificial turf.

Drogba was a sensation when he joined the Impact more than halfway through the 2015 campaign, helping them go 7-2-2 down the homestretch with 11 goals in as many games. He has been less effective this season, but still has 10 goals and six assists in 22 games, including 18 starts.

However, the team has gone 6-3-3 when he hasn't been in the lineup and only 5-8-9 with him, and has had success of late with newcomer Matteo Mancosu at striker.