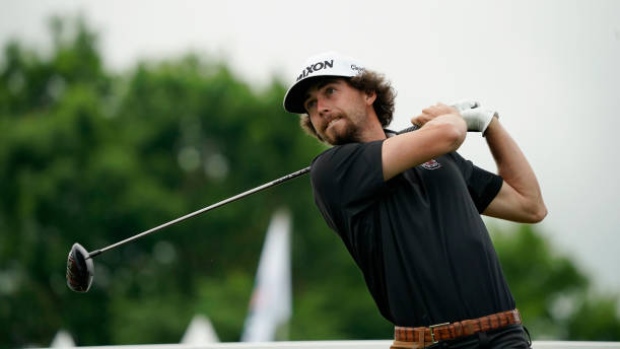 VICTORIA, British Columbia—Scott Stevens had trouble with the 18th hole Saturday. Fortunately, that wasn’t the case for the former South Carolina Gamecock on Sunday at the Uplands Golf Club. Stevens won the Royal Beach Victoria Open presented by Times Colonist with some late heroics, edging Jake Knapp on the third playoff hole. Besides his first professional win, he earned 500 Fortinet Cup points and takes the early lead in the season-long points chase.

“It’s just a dream come true, really,” Stevens said. “I’ve been working my whole life to have this opportunity and to take advantage of it my first time out here is pretty awesome.”

A day earlier, Stevens concluded the third round with a double bogey on Upland’s closing hole.

Needing a birdie on No. 18 a day later to force a playoff with Knapp, a PGA TOUR and Korn Ferry Tour veteran, Stevens came through. He then birdied the 18th two more times before winning the tournament and taking the first step toward winning the Fortinet Cup on No. 16, canning a five-foot putt on the third extra hole.

The surge proved to be quite dramatic, beginning with a 15-foot putt for par on No. 16 in regulation. The birdie outburst soon followed as Stevens wound up prevailing in the season-opener.

“It was awesome. It was great,” Knapp generously said of the entertaining playoff. “I mean [Stevens] birdied 18 three times in a row and birdied 16, you can’t do much about that. It was well played by him. That’s just good golf.”

Redemption didn’t come easy as Stevens and others chased Cooper Dossey much of the final, rainy day. Stevens and Dossey entered the final round as co-leaders, three shots ahead of the field.

Dossey birdied two of the first holes to quickly improve to 15-under. Stevens struggled early on. Stevens had bogeys on the third and seventh holes. Although he climbed back to 13-under with a pair of birdies on the front nine, the gap with Dossey existed.

Meanwhile, Knapp and Canadian Joey Savoie joined Stevens at 13-under as the group closely pursuing Dossey entered the final stretch. Canadian Étienne Papineau also made a late charge, getting to 12-under with a 64. He tied for fifth overall. Dossey wound up in third. He had two birdies on the back nine before a pair of double bogeys cost him the lead. He had a par on No. 18. Like Stevens, he needed a birdie to make the playoff.

“I had a chance, and that’s all you can ask for,” said Dossey, who noted he was unlucky on his tee shot with a cameraman clicking behind him. “Golf is the hardest sport to win. You lose a lot.”

Dossey reached the green from 140 yards out on his approach, with mud on the side of his ball.

Knapp moved into contention and eventually the lead with three birdies on the back nine. The UCLA product then had to wait for Dossey and Stevens to finish. Stevens, who had five birdies each day of the tournament, got hot when he needed to at the end—enough to counter the 63 by Knapp.

Savoie was the top Canadian. He finished fourth at 14-under.