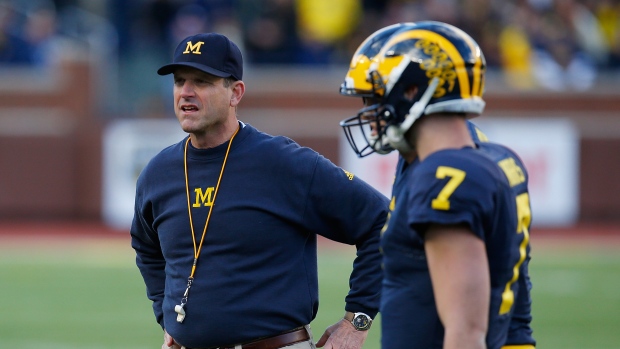 Michigan head coach Jim Harbaugh has set the record straight when it comes to his future plans.

The former San Francisco 49ers coach wrote a letter to the parents of his players and said that he has no intentions of leaving the Wolverines to pursue an NFL opportunity.

Jim Harbaugh refutes rumors of interest in the NFL: "I don't even have an agent or representative." pic.twitter.com/SyHDn3rsO2

Harbaugh said the reports of his desire to move on are entirely false.

"I am reaching out to let you know that the recent claims that I am 'pursuing an exit strategy' are total crap," Harbaugh wrote. "It's an annual strategy driven by our enemies to cause disruption to our program and to negatively recruit. By the way, I don't even have an 'agent or representative.' "

A native of Toledo, Ohio, and a Wolverines alumnus, Harbaugh is in his fifth season at the helm of the program, following four seasons as head coach of the Niners. Over four seasons with the Niners, Harbaugh compiled a 44-19-1 record and took them to Super Bowl XLVII where the team lost to the Baltimore Ravens, coached by his brother, John Harbaugh.

With the Wolverines, Harbaugh has yet to win a Big Ten title and they're unlikely to do so this season, sitting at 5-2 with divisional losses to Wisconsin and Penn State.

Still, he maintains his dedication to Michigan remains as strong as ever.

"I am committed to your sons, their education and to their development as football players and people," Harbaugh wrote. "Please excuse the informality of this letter but I felt that it was important to get this out to you as quickly as possible."

The No. 19 Wolverines host No. 8 Notre Dame on Saturday night.