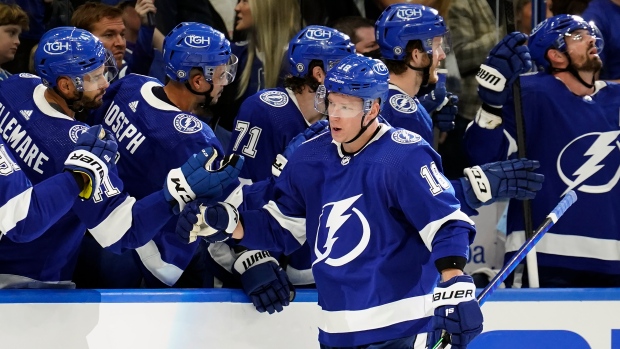 This week’s NHL wagers are all about goaltending.

The unpredictability of which players are healthy enough or eligible to play make assessing games based on expected lineups difficult, but if you have an inkling of which goaltenders are playing, this offers some potential guidance.

With two matchups, I embrace the superior goaltender. In one, I plan to profit off a game with lacklustre goaltending.

Here are my best bets for Saturday’s NHL action.

The Boston Bruins’ New Year’s resolution wasn’t self-improvement or appreciating the small things. It was taking a more equitable approach to the distribution of their forward talent.

The Perfection Line, a cudgel the Bruins use to smash their adversaries, was split up at the beginning of 2022. Starting in the game against Buffalo on January 1, David Pastrnak was reassigned to play with Erik Haula and Taylor Hall. Craig Smith jumped in as the third forward next to Patrice Bergeron and Brad Marchand. And Charlie Coyle slid down to No. 3 centre, a tacit acknowledgement by Boston that his promotion to No. 2 centre has been imperfect.

The rejiggering of the lineup worked for the most part. In their first three contests, the Bruins received balanced scoring. Against Minnesota on Thursday night, Bruins coach Bruce Cassidy caved and moved Pastrnak back to the first line when Boston was trailing. But the question remains: What is the best way for Boston to approach Tampa Bay on Saturday?

Now that Nikita Kucherov has rejoined Tampa Bay, the Lightning have two forward lines that can shred most teams in the NHL. With their talent not entirely concentrated on the first two lines, the Bruins exhibited more options that could strike off the rush and manufacture quality chances from the cycle. Cassidy has a choice. Lean on one killer line and three complementary lines or a more egalitarian diffusion of skill. Before and during the game, this is something to watch.

The Lightning are an inconvenient matchup for Boston. Tampa Bay has the best goaltender. The Bruins cannot outmanoeuvre the Lightning with their power and skill like they can with some of their weaker opponents. From an analytics standpoint, neither team is outperforming the other by a notable margin.

Tampa Bay ended 2021 and started 2022 with a three-game losing streak. While the Lightning strive to play fast and aggressive, the through line in their string of defeats was slapdash execution. The Lightning rely on back pressure from their forwards to empower their defencemen to take a confrontational posture when the enemy is in transition. In their last two victories, their characteristic tempo and precision was back.

I think this game will be decided by two important schematic elements, both of which involve Victor Hedman. The Lightning play man-to-man defence, and the Bruins are as adept as any team in the NHL at running set plays off faceoffs. The Bruins will want to drag Hedman and other critical defencemen high with their action off the draw, leaving Tampa Bay potentially vulnerable down low. Charlie McAvoy missed Thursday night’s game, and Boston’s ability to manipulate Tampa Bay is heavily predicated on McAvoy playing, as he is easily the Bruins’ best playmaking defenceman.

Secondly, Hedman is brazen in his efforts to charge up the weak side on the rush. Savvy opponents know that leaves Jan Rutta marooned as the last line of defence, and Boston will look to utilize the stretch pass to isolate Rutta on a counterattack area pass. Specifically, I expect Boston to try to get Pastrnak in this matchup. The Lightning have gotten scorched by the Panthers on stretch passes, although they have played them better in recent matchups.

I’ll show my cards: I don’t think Boston’s ploys will work. The Lightning aren’t quite unbeatable at home when Andrei Vasilevskiy starts, but they are close.

With Tampa Bay’s top-four defencemen back in the lineup and Vasilevskiy between the pipes, I think the Bruins will struggle to score. With Kucherov back, the Lightning have oodles of dynamism, enough to push the Bruins’ defence into uncomfortable positions. The sting from the losing streak is still recent enough that bettors can assume the Lightning will be focused and prepared on Saturday. Sounds like the formula for a winner.

Make no mistake – this contest could end up being the highest scoring game on Saturday. Getting up for a beverage is advisable only at a commercial break. Both teams rank at the top of the league in goals per game and each lacks a game-stealing goaltender.

The Washington Capitals have strong defensive analytics, but I am dubious they turn this game into a grind-out slog. Instead, I think we see two powerful offences slugging it out. And how each squad engineers offence should make the contrast in styles exciting.

The Capitals’ forwards hog the spotlight, but this team acquires its creativity and playmaking from its defencemen. Washington will cede puck-carrying duties to its blueliners in transition and defer to the defenceman’s directional compass on the cycle. It works: the inversion opens up the forwards to sprint up the gut for a rush chance or hide out in a quiet area for a shooting opportunity. Of late, the Wild have been a disaster defensively, and if they don’t monitor the Capitals’ weak-side defenceman pinching on every opportunity, they will get roasted.

Over the last month, only the Winnipeg Jets have been worse than the Wild in expected goals against and high-danger chances allowed. But how much should we weigh the Wild’s pitiful last month? In the previous 24 games, the Wild were a top-10 team in the defensive metrics. Injuries to Jonas Brodin and Jared Spurgeon unquestionably spurred some of their uglier recent losses, but Brodin will be dressing on Saturday.

Furthermore, goaltender Cam Talbot has been one of the worst goaltenders in the NHL in Goals Saved Above Expected (GSAx), but he is sidelined after suffering a lower-body injury. With Talbot out of the frame, it paves the way for Kaapo Kahkonen to play, and he has a very respectable 1.05 GSAx. If this game fails to hit the over, Kahkonen will be the culprit. It is worth noting that both of the Capitals’ goaltenders rate worse than Kahkonen, and in Vitek Vanecek’s case (the likely starter since it’s the second game of a back-to-back), much worse.

Opponents that hinder the Wild offence do so by taking away their speed through the neutral zone. Minnesota is heavily dependent on the rush, and its defencemen will drive the centre lane to push the Capitals’ defence back. If Washington isn’t careful, Minnesota could blitz them with that second wave off the rush.

There is no denying the significance of injuries to the Wild’s Kirill Kaprizov, Joel Eriksson Ek and Spurgeon. But Matthew Boldy and Marco Rossi are highly touted first-round picks who should keep the Wild offensively potent. It’s obviously a drop off, but Minnesota’s offence won’t evaporate.

The Wild have also been excellent at Xcel Energy Center, which makes me think that even with their injuries they will stay competitive. Six goals seem like a favourable over/under line for this game given the lack of a stellar option in goal.

In the NHL, where offence starts and defence ends is a blurry line. The Nashville Predators thrive in muddying up this distinction. The Predators understand the best defence is a relentless forecheck that keeps their opponent drowning in their own end. Nashville encourages its defencemen to aggressively step up and intercept stretch passes, and the reversal of possession gives ample runway for a dangerous counterattack.

I don’t think many people place the Predators in the same category as the Vegas Golden Knights, Florida Panthers, Tampa Bay Lightning, Carolina Hurricanes and Toronto Maple Leafs, but since December 1 the Predators have occupied the same tier in terms of expected goals and high-danger chances. Nashville is dominating play, and a top-five defence at 5-on-5 has complemented the inimitable Juuse Saros. Over his last 10 games, Saros has the best Goals Saved Above Expected (GSAx) in the NHL.

Poor Arizona. They are tied with Montreal for the fewest wins this season, with seven, and they currently rank last in goal differential and shots percentage at 5-on-5. Thursday was a vacation from a disappointing season, as the Coyotes triumphed over the Chicago Blackhawks 6-4. It was a wild affair. There were puck management miscues, coverage lapses, and the goals kept coming! The game had the same junky appeal of certain reality TV shows. Cringe or cackle, it was hard to stop watching.

The Predators aren’t as playful. They keep tight gaps and waylay you with their physicality. The have a speedy breakout led by a mobile and offensively dangerous defensive group. And they have a first line that is doubling its adversaries in goals. Mikael Granlund, Matt Duchene and Filip Forsberg inject dynamism and swagger to a team that mostly leans into its grinding identity. Forsberg is also white hot, having scored 15 goals in his last 18 games.

The Coyotes have won consecutive games once this season. Arizona has three shootout losses and zero overtime losses. It may be low-hanging fruit, but I am happy to take the Predators in regulation time.