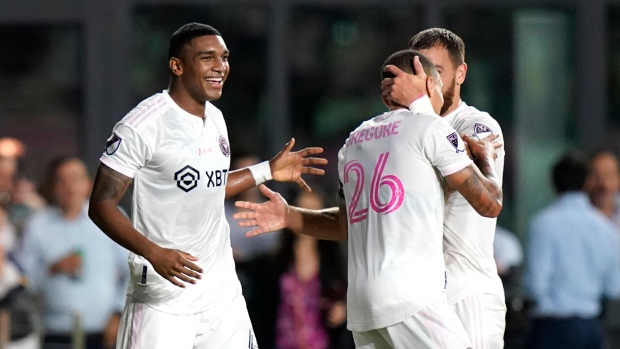 Miami had been outscored 16-1 in six straight losses since winning 1-0 in Toronto on Sept. 14. A visit by TFC changed all that, with Miami posting its third win over Toronto this season.

Miami, in 11th spot in the Eastern Conference, is six points out of the playoffs. Toronto, languishing in 13th place, remains in a different area code.

Toronto coach Javier Perez said mistakes cost his side but he saw some positives on the evening.

"It wasn't a 3-0 game tonight. I don't think the scoreboard reflected what happened on the field. … For good sequences of the game, we were the better team on the field but at the end, it doesn't matter," said the Spaniard.

Federico Higuain and Christian Makoun scored for Miami, which also benefited from an Eriq Zavaleta own goal.

The first two Miami goals came from Toronto errors in the first half. An errant pass from goalkeeper Alex Bono led to the first with the second coming from slack defending off a corner. The third bounced in off Zavaleta as he tried to defend a corner in the second half.

Toronto was missing both of its starting centre backs with Omar Gonzalez and Chris Mavinga both injured.

Phil Neville's team had been blanked in its four previous outings, all on the road. Miami had managed just one shot on target in each of its last two games and had been outshot 64-34 (20-7 in shots on target) over the last four outings.

The set piece goals were the first off a corner for Miami this season.

"Hopefully now that is another way of us scoring," said NevilIe. "I'm pleased. It's been a long time coming. We've worked really hard and we've got an outstanding coach (Mark Mason) that has innovative ideas that should have got better rewards for the work that he was doing."

Jahkeele Marshall-Rutty was one of the few bright spots for Toronto on Wednesday. The 17-year-old winger looked lively in his first career start and eighth MLS appearance.

The club has looked to bring the teenager on slowly.

"Jahkeele was terrific. It's no surprise for me," said Perez. "It was just the right time for him. He is so young and he's so talented."

Jacob Shaffelburg, a 21-year-old who has been one of Toronto's better players of late, was lively on the other wing.

"I've been impressed with those wingers all season," said the Miami coach. "I've watched a lot of them both in the USL and in the first team. Shaffelburg, I think, has played really well against us. Probably one of their standout players and I told him that at the end.

Noble Okello, a 21-year-old midfielder, got his eighth start of the season.

"Getting the young guys some minutes was a positive tonight," said veteran fullback Justin Morrow. "I thought Jahkeele did really well. It's nice to see him do what he's been doing in practice and put it on the field tonight. That was a big step forward for him."

Morrow marked his 250th appearance for Toronto in all competitions, second only to Jonathan Osorio (287). The 34-year-old Morrow is retiring at the end of the year.

The injury problems that have dogged Toronto's designated players this season continued with Venezuelan Yeferson Soteldo limping off in the 39th minute. Alejandro Pozuelo, who started Wednesday, and Jozy Altidore, who came on to open the second half, have both had lengthy injury absences this season.

Perez was awaiting word on the extent of Soteldo's injury, likely a hamstring.

"He couldn't continue so it cannot be light or good news for us ," he said.

Toronto, coming off a 2-0 weekend loss to visiting Atlanta that officially eliminated it from playoff contention, has four remaining regular-season games but is focusing on the Nov. 3 Canadian Championship semifinal with Pacific FC.

After the September loss to Miami, TFC went unbeaten in its next five games (4-0-1) in all competitions — a run that was snapped in the weekend loss to Atlanta.

Higuain got his goal in the 10th minute, punishing Toronto after Bono's attempted pass went straight to the 36-year-old Argentine. With Bono out of position, Higuain hammered the ball home for his second goal of the season and the 59th of his 10-year MLS career.

It was Miami's first goal in 396 minutes, dating back to a 5-1 defeat Sept. 22 at the hands of Nashville SC. It was also the 12th time Toronto has conceded in the first 15 minutes of a game, which ranks worst in the league.

Toronto had a Soteldo goal called back in the 13th minute for offside after the Venezuelan poked him a rebound of Marshall-Rutty's shot.

Makoun made it 2-0 in the 45th minute, left unmarked on a third straight Miami corner from Gonzalo Higuain, Federico's younger brother. Left in space, the Venezuelan defender had time to pivot and fire a left-footed shot home when the ball made it to him through traffic. One of the Miami corners came after Bono parried a Gonzalo Higuain free kick just outside the box.

Both of Makoun's goals this season have come against Toronto.

Gonzalo Higuain shot just wide in the 56th minute. An unmarked Makoun had another chance off a corner in the 60th minute but Bono got a hand to it.

Miami scored on the ensuing corner, with the ball coming off two Miami players and then Zavaleta in the 61st minute.

Miami has been short on bodies as well as goals in recent days. It dressed just six substitutes Wednesday and in the 4-0 weekend loss at Columbus.

Perez made six changes from the midweek starting lineup deployed against Atlanta.

Brazilian fullback Auro and midfielder Mark Delgado were both suspended while Gonzalez and striker Ifunanyachi Achara were injured.

This report by The Canadian Press was first published Oct. 20, 2021