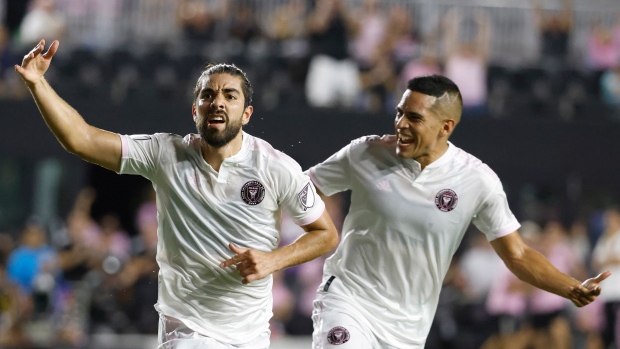 Miami (6-9-4) extended its record home winning streak to four, winning by more than one goal at home for the first time in the franchise's two-year history.

Robbie Robinson also scored for Miami. Nick Marsman lost his shutout on an own goal, a poor header by Kieran Gibbs on a long free kick into the box in the 62nd minute.

When Pizarro scored after a deft touch with a low shot into the left corner in the 15th minute it marked the 17th straight game that Toronto allowed a goal, tying the team record for consecutive games without a clean sheet. Gonzalo Higuain got the assist after Gibbs made a sliding steal that put the ball on Higuain’s foot.

A steal and a long pass by Gonzalez Pirez found Robinson down the left side in the 35th minute. Robinson beat a defender just inside the box and in tight quarters slipped a left footer inside the post.

Gonzalez Pirez set up Pizarro's second goal, his third of the season after he scored Miami's winner Wednesday, early in the second half. Gonzalez Pirez sent a long ball about half the pitch and a streaking Pizarro chipped it over Quentin Westberg from about the top of the box.