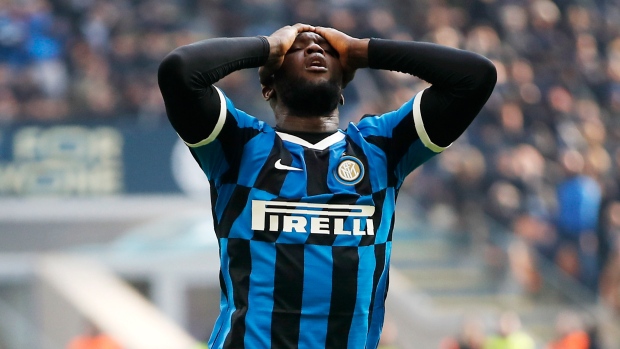 MILAN — Serie A leader Juventus lost 2-1 at Napoli on Sunday in a miserable return for former coach Maurizio Sarri, and a poor day for its title challengers too.

Piotr Zielinski and Lorenzo Insigne scored in the second half to inflict Juve’s second league defeat of the season, and end Napoli's three-match losing streak in Serie A. But Juventus only saw its lead cut to three points after Inter Milan drew 1-1 earlier in the day against Cagliari.

Third-place Lazio is five points behind Juventus but with a match in hand after it also drew 1-1 against Roma in the capital derby.

It was Sarri’s first match back at Napoli since leaving in 2018 after three seasons in charge of the southern-based club and he was greeted by jeers.

Sarri was asked if it hurt to lose at Napoli .

“Honestly no,” he said. “I’m happy for the lads, I will always have affection for them, and if you really have to lose at least they’re happy. But of course I would have preferred if they resolved their problems next week.

“I owe a lot to this group ... one always tries to extract oneself from everything and everyone, but it’s clear that for me Napoli represents a special stage in my career.”

Clear opportunities were few and far between, and Juventus didn’t have a shot on target in the first half for the first time this season.

Cristiano Ronaldo had scored 13 goals in his past 10 matches and he thought he had put Juventus ahead in the 53rd minute but the goal was ruled out for offside in the buildup.

Napoli broke the deadlock in the 63rd. Wojciech Szczesny could only parry Insigne’s shot and Zielinski turned in the rebound.

Insigne got on the scoresheet himself when his shot from José Callejón’s cross was deflected in by Matthijs de Ligt.

Ronaldo did score for the eighth consecutive league match but it came with less than a minute remaining.

Inter Milan’s title challenge took another blow after the team was held by Cagliari as Inter's traditional midseason slump appears to have taken hold again.

Radja Nainggolan, who is on loan from Inter, came back to haunt his former club when he scored the equalizer 12 minutes from time to cancel out Lautaro Martínez’s opener — which was set up by new Nerazzurri signing Ashley Young.

It was Inter’s third successive draw in Serie A. Since 2013, Inter has only once managed to win more than one league match in January.

“We often lose awareness because of tiredness,” Inter goalkeeper Samir Handanovic said. “But we could have finished off these matches earlier.

“We have made mistakes that we shouldn’t be doing if we want to aim for something important. I’m not worried because we’re creating chances. We’re lacking a bit of quality in finishing, but it’s more worrying when you don’t create them.”

Young, who was making his debut after joining from Manchester United, had an immediate impact. He crossed the ball for Martínez to head in at the far post in the 29th minute.

Young had no assists in the Premier League this season.

Inter wasted a number of opportunities to extend its advantage and was made to pay for its profligacy as Nainggolan’s strike from outside the area was deflected in off the base of the left post.

It got worse for Inter as Martínez was sent off in stoppage time after being shown a yellow card for dissent and an immediate second for something else he said to the referee. Martínez had to be dragged off the pitch and Inter players and staff surrounded the referee after the final whistle.

Inter coach Antonio Conte did not talk to the media after the match because he was not feeling well, according to the club.

Questionable goalkeeping contributed to the derby draw between Roma and Lazio - a result that dented Lazio’s Italian league title hopes and left Roma hanging precariously on to the final Champions League spot.

First, Lazio goalkeeper Thomas Strakosha charged forward to grab a high ball but misjudged his timing, allowing Roma striker Edin Džeko to connect on a header from near the penalty spot that bounced off the post into the empty net.

Then Roma counterpart Pau Lopez punched a corner away above his goal but the ball bounced back down onto the crossbar and off the head of Roma defender Chris Smalling, allowing Lazio centre back Francesco Acerbi to knock it in.

Parma moved up to seventh after a 2-0 win over Udinese with goals from Riccardo Gagliolo and Dejan Kulusevski, whose rights were recently acquired by Juventus.

Hellas Verona is two points further back in ninth after a 3-0 victory over Lecce. Sampdoria and Sassuolo drew 0-0.