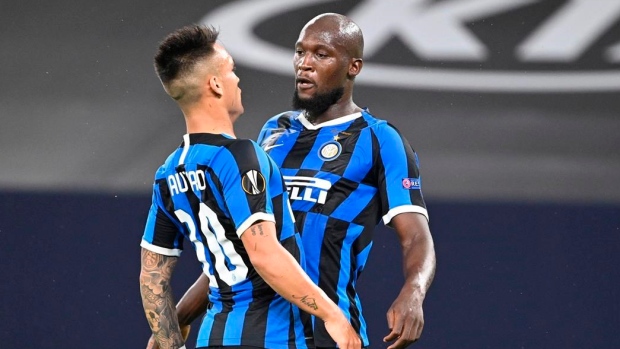 DÜSSELDORF, Germany — As Inter Milan prepares for its first European final for 10 years, it's encouraged not only by Romelu Lukaku and Lautaro Martínez's goals but also by their harmony on the field.

The partnership is known as “LuLa” by Italian media, from the first letters of Lukaku's surname and Martínez's first name. Two goals apiece in the 5-0 defeat of Shakhtar Donetsk in the Europa League semifinals Monday took them to a combined 54 this season.

After Inter suffered from splits in the squad around the departure of former captain Mauro Icardi in 2018-19, the obvious chemistry between Martínez and Lukaku is a welcome change ahead Friday's final against Sevilla. Lukaku assisted Martínez for Inter's third goal and Martínez returned the favour for Lukaku to score the fourth.

“The most important thing for me is that many lads are playing this type of game for the first time and gaining experience playing in an important competition in which we haven’t managed to be protagonists for a long time,” coach Antonio Conte said after the semifinal win.

Despite their goals, the win over Shakhtar was just as much about what Lukaku and Martínez did without the ball. Inter led by just a goal until the 64th minute and the duo's intense pressing of the Shakhtar defence was crucial in preventing the Ukrainian club developing any promising passing moves.

A win over Sevilla will give Inter it first trophy of any kind since the Coppa Italia in 2011.

“We’ll now be coming up against Sevilla, who have traditionally done really well in this competition, but we have the desire to amaze people. I was worried about this game because Shakhtar are a strong side, but we made them look ordinary,” Conte said.

Jose Mourinho left Inter for Real Madrid almost immediately after beating Bayern Munich in the 2010 Champions League final to complete a treble. The last decade has been largely barren as Juventus became the undisputed superpower in Serie A, while Inter finished as low as ninth in 2013.

Funding from Chinese owner the Suning Group put Inter on the path to recovery after its 2016 takeover, but problems remained. In 2018-19 the squad was split when Icardi was stripped of the captaincy and new signing Radja Nainggolan performed below expectations.

Former Juventus and Chelsea coach Conte has reimposed discipline in his first season in charge, while Icardi and Nainggolan both left and veteran midfielder Ashley Young and Lukaku, who has scored 33 goals this season in all competitions, were brought in.

Lukaku is one off the 34 goals scored by Brazil legend Ronaldo in 1997-98, still the club record for a player in his first season. That included a goal in the 3-0 win over Lazio in the final of the UEFA Cup, the tournament now known as the Europa League.