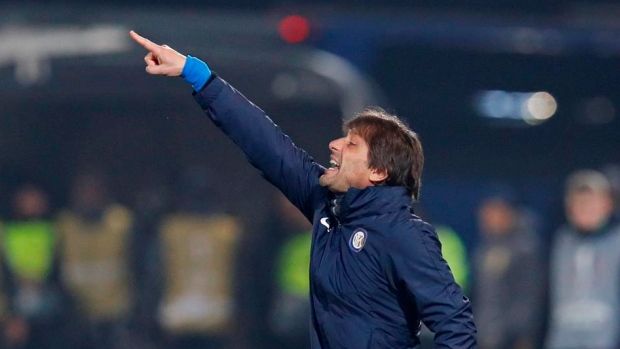 Inter-Ludogorets to be played in empty stadium due to virus , The Canadian Press

MILAN — Inter Milan announced on Monday that its Europa League match against Ludogorets will be played behind closed doors as authorities try to contain a spreading virus that has made northern Italy the focal point of the outbreak in Europe.

The Italian government is moving toward having other soccer matches played without fans in attendance in affected areas but Thursday’s match was the first to be confirmed as going ahead in an empty stadium.

“Inter announces that, in accordance with the requirements of the health authorities in the Region of Lombardy and the Municipality of Milan and with the agreement of UEFA, the second-leg clash between Inter and Ludogorets at the round of 32 stage of the Europa League will take place at 21:00 CET on Thursday 27 February behind closed doors at San Siro,” Inter said in a statement on Monday evening.

The decision was widely expected and Ludogorets had announced shortly before that Inter had sent it a letter stating that the city's health authorities have allowed the match to go ahead behind closed doors.

Ludogorets added that UEFA has said it is monitoring the situation and will react immediately if anything changes.

Inter leads 2-0 from the first leg of the round of 32 clash.

Civil protection officials said at least 229 people have tested positive for the virus in Italy. State television on Monday night reported the seventh death of an infected person — that of a 62-year-old man who already had serious health problems. The other six victims, also with pre-existing medical conditions, were elderly.

The majority of those known to be infected with COVID-19 hail from two main clusters — some 10 towns in Lombardy and another area in the neighbouring region of Veneto. Italy has the highest number of cases outside Asia.

Four Serie A match scheduled for last Sunday were postponed, including Inter’s home match against Sampdoria.

Inter’s key match at Juventus next Sunday will likely also be played behind closed doors, as well as several other matches in northern Italy.