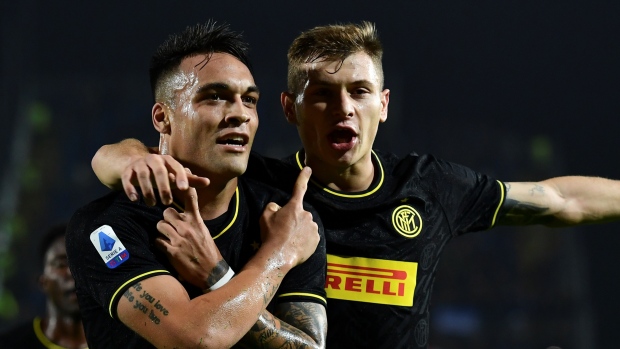 MILAN — Inter Milan moved back atop the Serie A standings with a 2-1 win at struggling Brescia on Tuesday.

Goals in each half from Lautaro Martinez and Romelu Lukaku sent Inter two points above eight-time defending champion Juventus, which hosts Genoa on Wednesday.

"We mustn't get carried away by the table or relax because at the moment we're driving the car at full gas," Inter coach Antonio Conte said. "It's credit to this group that it's doing things above expectation."

Inter had wasted the opportunity to take advantage of Juve's draw with Lecce this past weekend as it was also held to a draw, by Parma.

"Tonight was the fourth match in nine days in which the same men are playing," Conte added. "The guys put in an incredible effort. ... It's an anomaly to play seven matches in 20 days, this seems to me very strange."

The Nerazzurri took the lead on Tuesday with a stroke of luck in the 23rd minute as Martinez's long-range effort deflected off Andrea Cistana and looped over Brescia goalkeeper Enrico Alfonso and into the back of the net.

Lukaku doubled Inter's lead in the 63rd, racing down the right flank before cutting inside and curling the ball into the left side of the goal.

Brescia didn't let their heads drop and Mario Balotelli almost scored against his former club but Inter goalkeeper Samir Handanovic saved his first attempt and Balotelli then fired the rebound over from close range.

The home side did get one back shortly after as Dimitri Bisoli's effort took a double deflection off Handanovic and Milan Skriniar. It went down as an own goal to the Inter defender and set up a nervy final 15 minutes.

Hellas Verona maintained its impressive defensive record as it won 1-0 at Parma.

Verona has only conceded eight goals in 10 matches, fewer than any other team apart from Juventus and Cagliari which have let in the same number but have both played a match less.

Darko Lazovic scored the only goal with a powerful strike in the 10th minute.

Gervinho almost scored a second-half equalizer but his effort came off the crossbar, while Verona goalkeeper Marco Silvestri pulled off a number of saves.