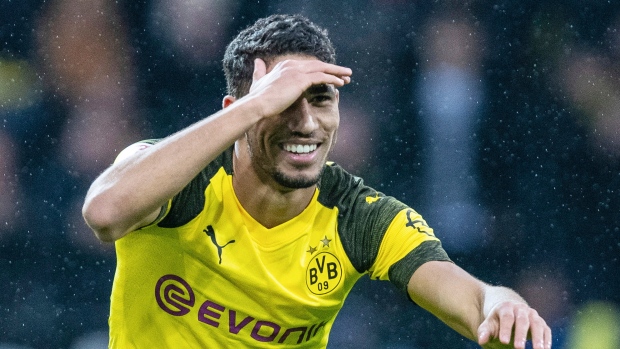 The long-rumoured deal is finally done.

Inter announced on Thursday that it had completed the signing of Achraf Hakimi from Real Madrid and inked the Morocco full-back to a deal through 2025.

Hakimi, 21, is a product of the Real academy and has spent the past two seasons on loan at Borussia Dortmund.

"The club wishes to thank Achraf for his many years of dedication, professionalism and exemplary conduct since he joined our academy in 2006 and wishes him all the very best in this new chapter," Real said in a statement.

A native of Madrid, Hakimi made 45 appearances across all competitions for Dortmund this season, scoring nine times.

Hakimi made 17 appearances across all competitions for Real in 2017-2018, the only games he would play in for the senior side. He won the Champions League with Real in 2018.

Internationally, Hakimi has been capped 28 times by Morocco and was a member of the side that went to the 2018 World Cup in Russia. Hakimi was eligible to play for Morocco through his parents.