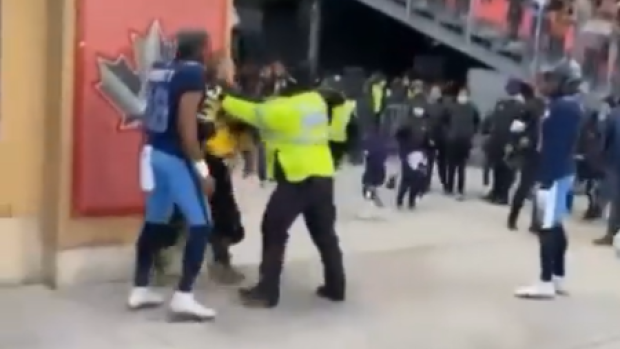 Maple Leaf Sports and Entertainment security, the Canadian Football League, the Toronto Argonauts and Metro Toronto Police are co-operating in an investigation into events at the end of Sunday’s East Division Final in which Argo players and one member of the team’s front office were involved in altercations with fans of the visiting Hamilton Tiger-Cats.

The incidents occurred as the Argonauts were leaving the field in the northeast corner of BMO Field, an area of the stadium where the players walk among fans separated by a series of steel barriers.

The setup provided thousands of Tiger-Cat fans with close access to the Argos, leading some to allegedly throw items at the players and staff when they were exiting the field following their 27-19 loss.

Full Video 2/2
Only thing we know for certain is BMO security lost control of the situation. pic.twitter.com/dV4WOp7Lxj

Cats fan only gets involved after he pushes that lady and calls her names. Argos coach hits first. pic.twitter.com/IbUCnzQJmR

Two Hamilton fans were issued trespassing tickets after allegedly jumping a barricade and attempting to fight with players, according to a police spokesperson.

A chaotic scene unfolded not far from the Argonauts locker room which was locked once players were inside, while police and security cleared the area.

In one video, which has been reportedly circulated on social media, Argonaut players Chris Edwards and Dejon Brissett are seen engaged with a fan decked-out in Tiger-Cat gear. In another, Argos VP of player personnel John Murphy is seen jawing with Tiger-Cat fans and allegedly engaged in physical contact both within and beyond the barrier.

It all came after a Hamilton victory ahead of next Sunday’s Grey Cup game against the Winnipeg Blue Bombers which will be played at Hamilton’s Tim Horton’s Field.