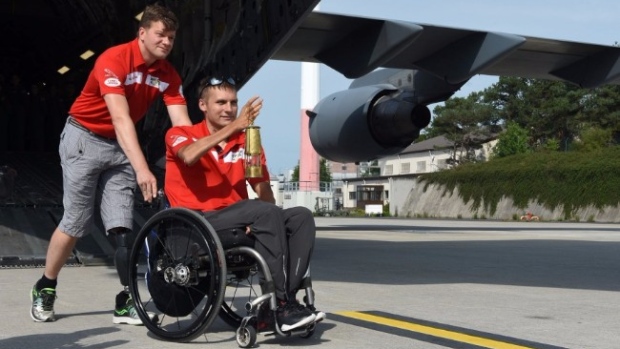 The Spirit Flame landed in Germany on Wednesday for its second stop en route to the 2017 Invictus Games in Toronto.

The Flame arrived at the Landstuhl Regional Medical Centre, a key surgical treatment centre for wounded soldiers, including Canadians who were injured in Afghanistan.

The Flame's voyage retraces the journey home that many Invictus Games competitors have endured from injury, to treatment, to the return home and their ensuing road to recovery. The route culminates at the Invictus Games Opening Ceremony at Toronto's Air Canada Centre on September 23, where it will be carried onto the stage by a Canadian competitor accompanied by family.

"And they received it, here in Germany at the Landstuhl Regional Medical Center with the help of the outstanding medical staff and the support for the families from Fisher House, they were able to begin to rebuild their lives. Without the care that they received here, many would not have made the journey to Invictus Games competitor and to be on their way to Toronto in September."

Invictus Games Toronto 2017 Team Canada members Cpl. (retired) Chris Klodt and co-captain Maj. Simon Mailloux were in attendance to receive the flame and to thank the medical staff there for saving their lives and returning them home to their families.

The flame was lit last week at the Afghanistan Presidential Palace in Kabul.

The Games will take place from September 23 to September 30 and will be broadcast on TSN and CTV.