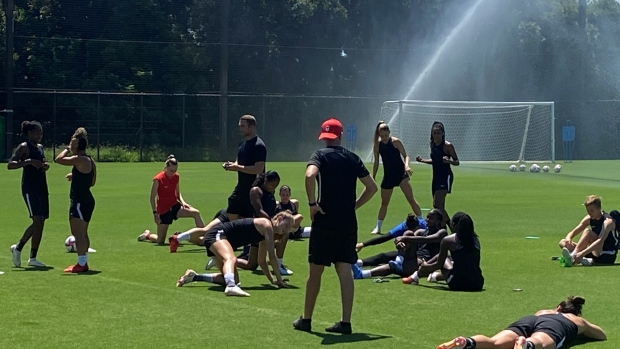 CHIBA, Japan — Kadeisha Buchanan sprayed sunscreen on her arms. Desiree Scott took a big swig from a water bottle. Christine Sinclair and Stephanie Labbé chatted while stretching out under the blazing sun.

The Canadian women's soccer team prepared for the sweltering conditions expected in Friday's gold-medal game by training outdoors a day earlier in the same time window. The Swedish players did the same at a different training field.

Later Thursday, the teams got the news they were hoping for. Olympic organizers had moved the kickoff from Friday at 11 a.m. local time - right in the heart of the midday heat - to 9 p.m. instead.

"I think the change makes absolute sense for the spectacle of what the game can be," said Canadian head coach Bev Priestman.

In addition to the kickoff change (now Friday at 8 a.m. eastern time rather than Thursday at 10 p.m. ET), the venue was also moved from Tokyo's Olympic Stadium to International Stadium Yokohama, a Canada Soccer spokeswoman said.

Both federations supported a time change out of concern for the players' health and safety. Midday temperatures in the mid-30s were expected again Friday with the humidex making it feel more like the low 40s.

"For anyone tuning in around the world, it'll be a much better game because of (the change)," Priestman said. "I just can't wait to get going."

The change was made after FIFA, the sport's governing body, along with the IOC and the Tokyo 2020 organizing committee, reviewed plans for the final.

"In order to continue to provide the best possible conditions for the players, and having taken into consideration the impact of weather conditions at the Olympic Stadium over the last few days, it has been confirmed that this match will now take place at 21:00 at the International Stadium Yokohama," the Tokyo 2020 communications team said in an email.

On Thursday morning, the Canadians trotted out on the grass at Inage Kaihin Park near Tokyo for a 90-minute training session in conditions they thought would be virtually identical to those expected at game time.

The mood was breezy as players did light drills for the 15-minute period that was open to media. Coolers with water bottles were stationed at the sidelines and a stereo blasted a mix of summery tunes.

The session wrapped up just over an hour later. Priestman and Swedish counterpart Peter Gerhardsson were originally scheduled to hold separate mid-afternoon media availabilities in the Olympic village.

But when organizers pushed those news conferences well into the evening, it sparked speculation that an announcement might be forthcoming.

The original late-morning kickoff was an almost unprecedented early start time for an international soccer match. Most of Canada's games have been played in the evening at this tournament.

"I know that this group is so good at adapting, so we were ready for the 11 a.m. kickoff," said Canadian defender Ashley Lawrence. "But I completely agree, I think it's great that we can play at 9 p.m., just with the weather.

"And for both teams, it's going to make for a better game."

The eighth-ranked Canadians have been riding high after topping the Americans 1-0 -- their first win over the U.S. in 20 years -- in the semifinal. No. 5 Sweden advanced with a 1-0 victory over Australia.

"We're still pinching ourselves that we're here," Canadian forward Janine Beckie said after the training session. "But I like that about this group. We're not satisfied at all. I think looking at training today, we're as fresh as we could be going into this game.

"But we have a lot of respect for the Swedish team. Obviously a fantastic group of players that have done really well in this tournament."

Sweden (5-0-0) has outscored its opposition 13-3 at the Games. Canada (3-0-2) is also unbeaten, tallying five times overall while conceding three goals.

Canada is coming off back-to-back Olympic bronze medals. Sweden settled for silver at the 2016 Rio Games after falling to Germany in the final.

Sweden eliminated Canada in the round of 16 at the 2019 Women's World Cup. Stina Blackstenius, who has scored four times in Tokyo, had the lone goal.

Sinclair, the veteran captain who leads all players with 187 career international goals, anchors a Canadian side that has 12 returning players from the Rio squad. Fifteen of the 22 players on the full squad have at least 50 caps.

"Since the World Cup we've been talking about getting to play in a gold-medal match," said midfielder Jessie Fleming, who scored from the penalty spot in Canada's semifinal win. "So I think we've had our sights set on this for a long time.

The Canadians showed no signs of any big-game jitters on Thursday. In fact, it was quite the opposite.

The players seemed cool, comfortable and confident. Before starting the training session, Sinclair and a few teammates even hammed it up a little for photographers on the sideline.

"The feeling is light, bright and ready to go," Beckie said.

The United States edged Australia 4-3 in the bronze-medal game on Thursday evening.

In the men's tournament, host Japan was to face Mexico for bronze on Friday night. Organizers changed the start time to 6 p.m. local time from 8 p.m. Brazil was to meet Spain for gold on Saturday night.

The Canadian women own a 5-14-4 record in all-time head-to-head meetings against Sweden.

Sweden beat Canada 2-1 when they met in the 2013 Women's World Cup semifinal. Beckie scored in Canada's most recent win over Sweden, a 1-0 decision in a 2017 friendly.

"We're resilient, we're fighters," Beckie said. "We'll fight for one another. Our team culture always shines through. That's our X-factor 100 per cent."