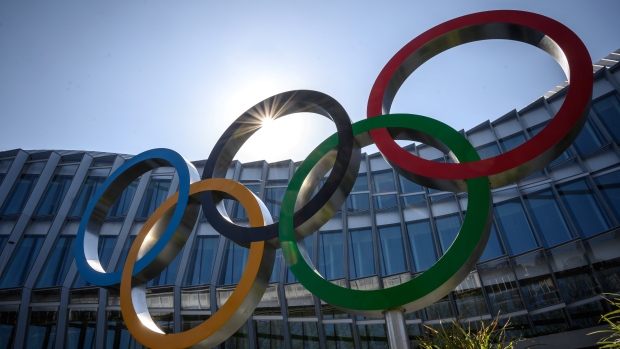 The International Olympic Committee budging slightly on its position about protest gestures during Olympic Games earned both support and criticism from some Canadian quarters.

Rule 50 of the IOC's charter attempts to enforce political neutrality at Olympic Games, but allows athletes to express opinions in post-competition interviews and on social media.

Raising a fist or taking a knee, or wearing armbands or signs on the field of play or during medal presentations are not allowed under the IOC's charter.

Amid recent demonstrations over racial injustice around the world, the IOC has come under fire for a stance seeming to limit freedom of expression.

"What the IOC means when they say no demonstrations is 'nothing that disrupts our status quo, nothing that may upset our sponsors, nothing that expresses individual thoughts,'" Canadian racewalker Evan Dunfee said.

"I'll be fully supporting any and all athletes who want to use their platform to take a stand."

The IOC's athletes' commission will explore ways Olympians can show support "for the principles enshrined in the Olympic charter in a dignified way," IOC president Thomas Bach said Wednesday in Lausanne, Switzerland.

"We also agree at the same time with the athletes' commission we must always respect the Olympic spirit. This means we must make a difference between such a support for the principles enshrined in the Olympic charter and potentially divisive demonstrations."

The Canadian Olympic Committee supports the IOC's willingness to entertain input on Rule 50 and will work with its own athletes' commission "in identifying opportunities for Canadian Olympians to continue to maximize the athlete voice," the organization said Wednesday in a statement.

"During this time of protest and self-reflection, we remain determined to listen to our Team Canada athletes so we can best stand united against racism, both casual and systemic."

But some Canadians feel the IOC shouldn't be limiting athlete expression at all during the Olympic Games.

"It's the biggest athletic stage in sports really to get a global audience, and that's very powerful — or has the potential to be very powerful, unless you silence the voices there," said retired three-time Olympic runner Kevin Sullivan.

The cross country and track coach at the University of Michigan says injustice and inequality doesn't stop during the 16 days of an Olympic Games.

"I'm seeing Thomas Bach this morning is saying 'Well now we're going to let our athletes council provide us with some guidance on this.'" Sullivan said. "So they're already starting to backpedal under some of the pressure that's coming their way.

"You see other organizations now, the NFL has backtracked on their kneeling policy, USA Soccer just changed their policy on allowing their athletes to protest.

"I think there's a movement here from other large sports organizations to encourage this freedom of speech and being able to express yourself that frankly for the IOC not to jump on board is pretty antiquated."

She supported the choices of Australia's Mack Horton and Britain's Duncan Scott to not stand on the medal podium alongside China's Sun Yang at last year's world swimming championships.

Yang was later banned from competition for eight years for doping infractions.

Pierse believes athletes are right to bring attention to any type of injustice.

"As athletes, we have such a platform," Pierse said. "Whether we want it or not, we are role models, mentors and game-changers.

"I'm trying to use my platform to try and make a difference. A lot of my outspokenness has come from drugs in sport and the doping that has gone on for so long and seems to get so pushed under the rug."

Countries have used the Olympic Games for political purposes throughout history. Athletes have taken advantage of competing on a world stage to express themselves.

Canada joined a U.S.-led boycott of the 1980 Summer Games in Moscow over the Soviet Union's invasion of Afghanistan.

South Africa was barred from Olympic Games from 1964 to 1988 because of the country's apartheid policies.

The most enduring image of an athlete protest is U.S. sprinters Tommie Smith and John Carlos raising their fists on the podium at the 1968 Mexico City Olympics.

Dunfee points out that wearing the Maple Leaf at the Summer Games is making a statement.

"When I put on that Canada singlet the morning of my race at the Olympics I know that I'm going out there to be an ambassador for my country," he said.

This report by The Canadian Press was first published June 10, 2020.