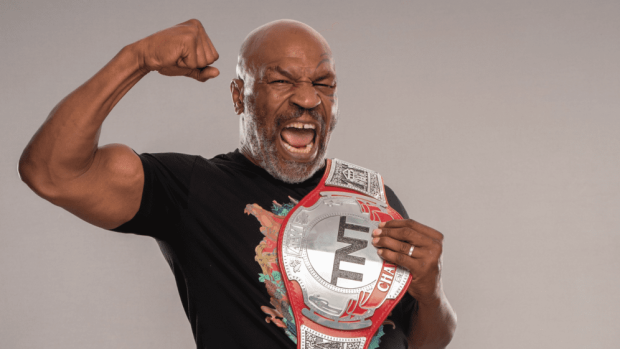 "The Baddest Man on the Planet" Mike Tyson makes his return to AEW Dynamite on Wednesday night, plus AEW World Heavyweight Champion Kenny Omega and the AEW World Tag Team Champions The Young Bucks (Matt Jackson and Nick Jackson) square off on opposite sides in a trios match. You can catch all of the action LIVE on Wednesday night at 8pm et/5pm pt on TSN2, the TSN app, streaming on TSN Direct and on TSN.ca.

Trios match: AEW World Champion "The Cleaner" Kenny Omega (w/ Don Callis) and the Good Brothers (Doc Gallows and "Machine Gun" Karl Anderson) vs. AEW World Tag Team Champions The Young Bucks (Matt Jackson and Nick Jackson) and Jon Moxley - The deteriorating relationship between former Elite stablemates Omega and the Jacksons will finally become physical on Wednesday night. As far as the Bucks are concerned, everything about Omega has changed since he fell into Callis's orbit in December. The new vicious and paranoid Omega isn't the man they traveled the world with, but Callis claims that the Jacksons have changed, too. Callis insists that the 2021 Young Bucks aren't the same two men who ran roughshod over Ring of Honor and New Japan Pro-Wrestling's tag-team division. The fire is gone, he claims. Joining Omega on Wednesday night are his ever-present running buddies, the Good Brothers, a pair of men that the Jacksons also once considered friends and were stablemates in Bullet Club. Backing the Jacksons is Jon Moxley, a man who has had no shortage of run-ins with Omega and the Good Brothers over the past several months since Omega and Callis conspired to take Moxley's world title from him. The former AEW World Champion has an extra bone to pick with the trio now since they put Eddie Kingston on the shelf by Pillmanizing his ankle. Whatever happens on Wednesday night won't likely be pretty.

TNT Championship match: Darby Allin (c) vs. JD Drake (w/ Ryan Nemeth and Cezar Bononi) - Darby Allin has made it clear over the past several weeks that he intends to defend his title more frequently than he has been in an attempt to add some prestige to the championship. His defence on Wednesday night will be just his fifth and the first since successfully fending off the challenge of John "4" Silver on Mar. 24. Drake presents an interesting obstacle for the champion, however. A newcomer to AEW, Drake enters the match with nothing to lose and everything to gain. This will be the first time they pair has met in a singles match, but not the first time the two have shared a ring. It was Drake who emerged victorious at an EVOLVE show in October of 2018 in a six-way ladder match to claim the vacant WWN Title, defeating, among others, Allin. While Drake's AEW record isn't sterling, he's somebody who Allin can ill-afford to take lightly and held titles across the country. Overlooking Drake on Wednesday night will be at Allin's peril.

The Bunny (w/ The Hardy Family Office) vs. Tay Conti (w/ The Dark Order) - The Bunny made her triumphant return to action on Dynamite last week with a pinfall victory over Conti in tag-team action. It was the Toronto-born competitor's first match on Dynamite in nearly seven months and in beating the current No. 1 contender to Hikaru Shida's AEW Women's World Championship, the Bunny staked her claim as a player in the women's division. And that's exactly what her new manager, Matt Hardy, said he would help to accomplish. Of course, it was the Hardy Family Office that led to the Bunny's victory last week when their distraction on the outside allowed her to hit Conti with a kendo stick. Conti will be out for revenge and to keep her recent winning streak in singles matches going. To ensure no monkey business from Hardy and his cohorts, Conti will have members of The Dark Order in her corner. Can the Bunny make it two straight over Conti or will the Brazilian's winning ways in singles matches continue?

"Hangman" Adam Page vs. "Platinum" Max Caster - A former AEW World Tag Team Champion takes on a man who hopes to achieve that feat one day when Page takes on Caster on Wednesday night. One half of The Acclaimed, Caster has been forced into singles action in recent weeks with his partner, Anthony Bowens, currently out of commission with a knee injury. Thus far, Caster's run as a solo performer has been nothing short of spectacular. In singles matches since mid-February, Caster is undefeated, holding wins over the likes of Marko Stunt, Colt Cabana and Preston Vance. But taking on the red-hot Hangman is another proposition entirely. Page is undefeated in 2021 and hasn't lost a singles match since he fell to former tag-team partner Kenny Omega in the final of the World Title Eliminator Tournament at Full Gear last November. The match will provide a real opportunity for Caster to test his mettle against one of the very best that AEW has to offer.

Bear Country (Bear Bronson and Bear Boulder) vs. Jurassic Express (Jungle Boy and Luchasaurus) (w/ Marko Stunt) - The enmity between these two teams began during the Casino Tag Team Royale at Revolution in February when Bear Country eliminated Luchasaurus from the match. Their rift grew a few weeks later on Dynamite in a 10-man tag-team match. Bear Country and Jurassic Express couldn't coexist and the quintet were defeated by the Hardy Family Office (Matt Hardy, Marq Quen, Isiah Kassidy, The Butcher and The Blade). Wednesday night's contest is an opportunity for these teams to settle their differences once and for all. Bear Country is 7-1 in tag-team action in 2021 and will head into the match full of confidence. But Jurassic Express is 6-1 in tag-team matches in 2021 with their only blemish coming when Stunt was pinned by FTR (Dax Harwood and Cash Wheeler) at New Year's Smash. A win here for either team would go a long way to forcing themselves into the conversation for a shot at the Young Bucks' titles.

- The last time we saw Mike Tyson in AEW, he and his crew got into a brawl with Chris Jericho and the Inner Circle. He returns on Wednesday night, but the question is why?

- And speaking of the Inner Circle, fresh off their return to AEW last week and the vicious beating they doled out to The Pinnacle, we will hear from Chris Jericho, Jake Hager, Santana, Ortiz and Sammy Guevara for the first time since MJF's shocking betrayal.