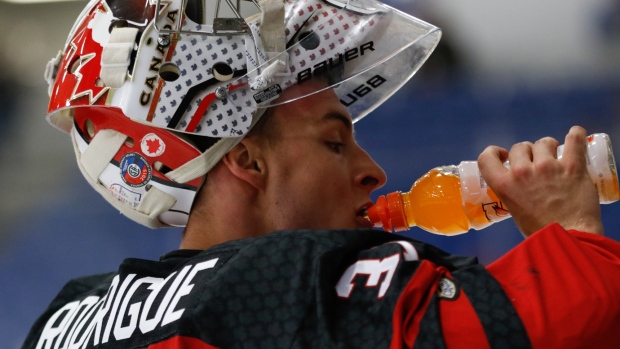 TSN Toronto reporter Mark Masters checks in daily with news and notes on Team Canada, which held a limited morning skate at Sixteen Mile Sports Complex in Oakville, Ont. ahead of a game against the U Sports all-stars.

That's the state of play when it comes to Team Canada’s crowded crease.

"The next few days are important for these goalies to show what they can do, because it's an open race and someone has to show if they can play in key situations," said Mark Hunter, who heads Hockey Canada's management group. "It's open and it's a good challenge for each goalie."

Moncton’s Olivier Rodrigue may have an inside track for a roster spot because he has the most international experience among the group. The Oilers prospect represented Canada at the 2018 under-18 World Championship in Russia and at the 2017 Hlinka Gretzky Cup.

Peterborough’s Hunter Jones has limited experience with Hockey Canada having attended the recent Summer Showcase in Plymouth, Mich. Prior to that he won a silver medal with Canada East at the 2016 World Junior A Challenge.

"There's really no go-to guy right now," Jones noted. "Everybody here is capable of taking it and that makes it more competitive."

Guelph's Nico Daws and Portland's Joel Hofer don’t have any previous experience in Hockey Canada's Program of Excellence, but they do have the best numbers of the four goalies at the camp.

"What we really like about this group is they've all trended really, really well from September to now," said Hockey Canada head scout Brad McEwen. "They all got extremely good numbers, they got wins, their teams are all doing well so they've put themselves in a good spot. You'd like to have the international experience ... but they're all really good goalies."

"I'm having a really good season right now," said Jones, whose Petes lead the OHL's Eastern Conference. "I'm on pace to break the Peterborough season win record so, I mean, I'm just trying to keep doing what I'm doing. I've had a really good first half and the team is playing really well in front of me. I think the Petes are due for an OHL championship this year. Don't quote me, but we'll see. We're confident."

Daws has backstopped Guelph to top spot in the OHL's Western Conference and is looking to complete an incredible turnaround. Prior to this season he had posted a couple sub .900 save percentages while serving as understudy to Anthony Popovich and was passed over in June's NHL draft.

"I had a good summer," Daws explained, "backing up for a couple years, I knew I had to have a breakout year this year and really prove I belong and I'm a good goaltender ... I came into this year not knowing where I was going to play, if I was going to start in Guelph or try to get somewhere else and it ended up working out. I got to stay in Guelph and really proved myself and happy other people are starting to take notice."

The under-the-radar path may be an advantage in a pressure-packed camp.

"That might help him," agreed McEwen. "He might just come in free and easy and have fun with it and see where it goes, because he’s been tremendous at Guelph."

Daws wasn’t even thinking about the World Juniors until he was invited to the Canada-Russia series games.

"Coming into this year I didn't have any expectations like that," he said. "I just wanted to be a proven starter and once I started to get good and get comfortable, you start thinking about opportunities like that. Being undrafted, you know, never playing for Team Canada before, there’s not really much pressure. Everybody’s not really expecting anything from you, so definitely not a lot of added pressure."

All four goalies are expected to see game action today and tomorrow.

How good is Daws? Well, he stopped Cole Perfetti in a shootout earlier this month.

"I got the better of him there and that one definitely felt good," Daws said.

"I thought I had him," Perfetti said with a smile. "I made a pretty good move, went backhand, forehand, had the empty net, tried to slide her in and then out of nowhere he stuck his toe out and his long leg got there, so he won that round."

Perfetti's shootout prowess is well known thanks to an incredible performance at the Hlinka Gretzky Cup in August. The Saginaw sniper led the tournament with eight goals, including an epic effort in the semifinals against Sweden when he scored on two breakaways in regulation before adding three more goals in the shootout.

"Ever since I was younger, whenever it was a big game I always thought I stepped up to the plate and played better when the stakes are higher," Perfetti said. "I don’t know what it is, I just like playing in front of crowds and in front of a lot people when there’s a lot of pressure. I just think it’s a lot of fun and I seem to play better."

Canada has lost four of its last five shootouts at the World Juniors and things seem to be trending in the wrong direction in that department. Canada has actually failed to convert in 10 straight penalty-shot situations, including a Maxime Comtois attempt in overtime of the quarter-finals last year.

And shootout skills will be part of the evaluation process when Canada compiles its final roster this year.

"It certainly matters," McEwen said. "The shootout, at some point, becomes a factor and it's something we've talked about a lot as a group so it certainly has some importance when we look at the whole thing."

But the 17-year-old Perfetti, who has 45 points in 29 OHL games this season, also needs to show he can produce in all situations against older competition.

"His vision, his ability to make plays, his ability in tight space to put the puck in the right spot, his offensive sense is really, really good," observed McEwen. "We expect him this week to do the same things, (but) U Sports is a good team, the last few years it's been a real challenge. So it's great for evaluation and I'm looking forward to seeing how he translates against the older players and how he does."

A handful of players skated this morning and are expected to be scratches tonight, including Flint forward Ty Dellandrea, London forward Liam Foudy and University of North Dakota defenceman Jacob Bernard-Docker.

Usually being a scratch in the first game of the selection camp is a positive sign, indicating the management staff already knows enough about what the player brings to the table. But Bernard-Docker insists he's not reading too much into his presence on the ice this morning. Last year, the Senators prospect was the final defenceman cut at the selection camp.

"I remember that day like it was, literally, yesterday," he said, "so definitely I took that into the summer and thought about it and tried to implement it into my workouts and work a little harder and get bigger and stronger for this year."

Canada has two returning defencemen, but both are left shots in Halifax's Jared McIsaac and Spokane's Ty Smith. At the moment, Bernard-Docker appears to be the top option on the right side unless the Islanders decide to loan Noah Dobson out. And while Canada's blueline features some gifted offensive-minded players like Vancouver's Bowen Byram and Lethbridge's Calen Addison, Bernard-Docker can help balance things out.

"Just be a guy that's reliable," the 19-year-old said of his potential role, "that's been a staple of my game."

What's the biggest difference between him this year and last year?
"Just my confidence," Bernard-Docker said. "Last year, maybe a bit tentative coming to this camp maybe a little nervous. This year, having that experience under my belt, and one year in North Dakota really helped me, so coming in more confident and knowing my strengths more."

Aidan Dudas also skated this morning as he works his way back from a hand injury. The Owen Sound forward did some puck handling, but did not shoot or receive passes.

Projected Team Canada lineup for today’s game vs. U Sports:
(Based on practices the last two days)