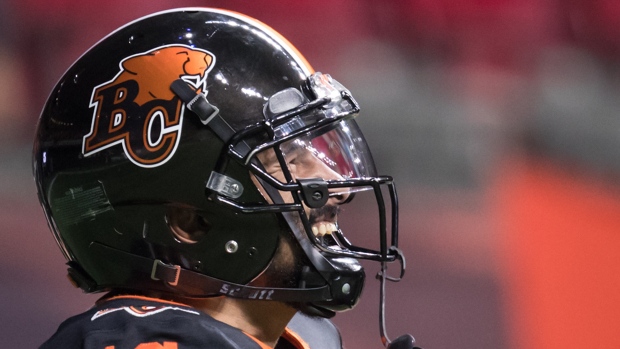 VANCOUVER — Bryan Burnham expected more out of the B.C. Lions this season.

The all-star receiver had his sights set on the team making a post-season run and finally competing for a Grey Cup.

While the Lions got off to a solid 4-2 start, the team sputtered down the stretch, losing seven in a row. B.C. finished the pandemic-condensed 14-game campaign with a 5-9 record and missed the playoffs for a second consecutive season.

The 31-year-old University of Tulsa product wasn't impressed with his personal performance, either, despite finishing with 932 receiving yards, the second-most in the league. He also hauled in five touchdown passes.

“It was a failure," Burnham said, noting that he wanted to post 1,000 yards and 10 TDs. "For me personally, I come into every season with a set of goals that I want to accomplish and I didn’t reach any of them."

What went wrong isn't yet clear, he added. The Lions didn't always have the intensity they needed, he said, and the team dropped a number of close games during the losing skid, but Burnham plans to rewatch game tapes to pick out specific areas for improvement.

For now, he just knows he doesn't want to feel this disappointment at the end of another CFL season — whether he's playing for B.C. or another team.

"I can already feel the fire building inside. Hopefully it’s here, but wherever I end up, it’s going to be some great motivation going into the off-season to get better and to make sure that I don’t feel this feeling ever again," said the pending free agent.

Burnham signed a one-year contract with the Lions in February and said he hasn't thought much about where he'll play next year.

Neil McEvoy, the Lions' co-general manager and director of football operations, wants to keep B.C.'s receiving squad intact. The team led the CFL in passing yards (4.037) and had two of the top five receivers in the league, including Lucky Whitehead, who was fourth with 932 yards despite missing two games with two broken fingers.

"We want to bring back the core of this team," McEvoy said. "We’re not going to rebuild and start from the beginning. We felt at the beginning of training camp that we had some top-notch players and unfortunately, the wins just didn’t come."

Whether veteran quarterback Michael Reilly will be the man throwing to the receivers also remains to be seen.

The 36-year-old Central Washington University product has a contract with B.C. through 2022, but McEvoy said that Reilly likes to go back and speak with his family about his future after every season.

"We’re going to let things settle down and watch the playoffs like everyone else," McEvoy said of talks with the QB. "And once the season ends for everybody, we’ll start the process of figuring out where we go."

Reilly finished 2021 as the CFL's passing leader with 3,283 yards, 14 touchdowns and six interceptions. But an issue with his right elbow lingered all year and he didn't dress for the final game of the season, a 43-10 win over the Edmonton Elks.

One person who'd like to see the former Grey Cup MVP return is Lions head coach and co-GM Rick Campbell.

“I certainly hope Mike comes back," he said. "I’ve really enjoyed working with him and he does a lot of things not only on the field but off the field for the locker room."

Campbell's been a fan of Reilly's backup, too. Canadian rookie Nathan Rourke started the final game of the season for B.C., passing for 359 yards, a touchdown and two interceptions. He also ran in three TDs.

The performance was no surprise to Campbell, who said he's liked the 23-year-old University of Ohio alum since the Lions took him 15th overall in the 2020 CFL draft.

"I fully anticipate Nathan to be a guy who can play in this league for a number of years and I’ve thought that from the beginning," the coach said.

B.C. has a lot of young talent on its roster, the coach said, including linebacker Jordan Williams, who had 92 defensive tackles and five special teams tackles in his first year, breaking records for a Canadian rookie.

While it wasn't the season the Lions expected, the young talent will help the club build going forward and management isn't planning on making a slate of changes before the 2022 campaign kicks off, Campbell said. Instead, B.C. wants to go out in free agency and add two to four players who can be difference makers.

“I think we have a lot of pieces of the puzzle But there’s no question that we need to get better," he said. "I think if we can add a few proven performers, it can swing us in the right direction."

This report by The Canadian Press was first published Nov. 22, 2021.