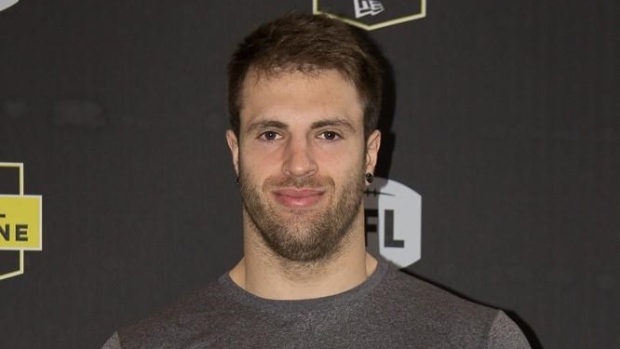 Like many Italians, Lorenzo Dalle Piagge's life has been turned upside down by the COVID-19 pandemic.

Last month, the Italian government imposed a nationwide lockdown — which it has since extended to April 13 — restricting travel while banning public gatherings. And with good reason as over 13,900 people in that country have died as a result of the outbreak, the highest total in the world.

The move seems to be yielding results as Italy registered its lowest death toll in over a week, fostering hope the pandemic might be reaching a plateau.

However, Dalle Piagge still can't work as a personal trainer/strength coach because gyms remain closed. And he's had to put his dream of playing pro football in Canada on hold.

The six-foot-four, 234-pound defensive end with the Milano Seamen was slated to attend the CFL's national combine last month before it was cancelled due to the novel coronavirus outbreak. The league will hold a global combine and draft prior CFL training camps opening.

But when that will be remains uncertain as the start of camps has also been postponed indefinitely.

Dalle Piagge was the lone player selected among 26 hopefuls from a CFL combine in Italy.

"It hurts (not going to CFL combine) but this is a global crisis where no one can do anything," Dalle Piagge said. "I've worked my whole life to do this but we're all in the same situation so we must wait.

"We're in much difficulty (in Italy) . . . my life has changed completely."

Fortunately for Dalle Piagge, he, his parents, brother and immediate family are all well. But the outbreak is wreaking havoc with his CFL preparation.

"It's a problem because as a strength-and-conditioning coach I prepare every step and it's crucial to know when the combine is," he said. "Without weights it's a problem . . . I can only use things I have at home so I've completely changed my workout routines, I can only maintain my level of fitness.

But Dalle Piagge also faces restrictions regarding how far he can run. The lockdown limits him to being only up to 2,000 metres from his home in Pisa, Italy.

"I can do sprint workouts," he said. "I do a lot of ladders, a lot of footwork.

"I do a lot of pushups, a lot of core stuff, everything I can possibly do without barbells."

"He stood out as a guy who could play rush end and outside linebacker," Quick said. "He has the skills we're looking for in the kicking game (special teams) but can also fit in as a pass rusher."

Dalle Piagga finished tied for first in the Italian league in tackles for a loss (7.5 in seven games).He was also tied for second in defensive tackles (18) and tied for third in sacks (2.5) with a forced fumble.

The Italian league plays American football but Dalle Piagge did employ some Canadian traits. He often lined up in a two-point stance, something many of the CFL's top pass-rushers do, and took his position a half-yard off the line of scrimmage rather than right up.

In Canada, the defence must line up a yard off the ball. And there's also the matter of playing on a wider, longer field and with one more player and with one less down. While he's played American football, Piagge feels his game would allow him to transition to life in the CFL.

Dalle Piagge has been playing football for roughly 10 years. Growing up, his sport of choice was swimming but that all changed when he stepped on to a football field.

"What I needed when I finished swimming was a team sport," he said. "One of my friends asked me to try football and I fell in love with the game at my first practice."

"I love to smash with other people," Dalle Piagge said with a chuckle. "I'd never had a sport with contact.

"In swimming, the only thing you hurt is the water behind you."

"It (pro football) is the dream of my life," Dalle Piagge said. "It's a dream that's been so big that I never thought it was possible."

And if given the chance to play in Canada, Dalle Piagge said he'd be more than ready to commit fully to the game. When he was working as a personal trainer, Dalle Piagge found time to work out twice daily, the second session often coming late in the evening, in addition to spending time with his clients.

"My job is to train people and it's my dream to just train me," he said. "Every day I'm fully meshed in sports so I think I could (adapt to) a pro athlete's life.

"When you work out people until 8 p.m., it's not always easy to have the right mentality but you must stay focused to reach your goals."