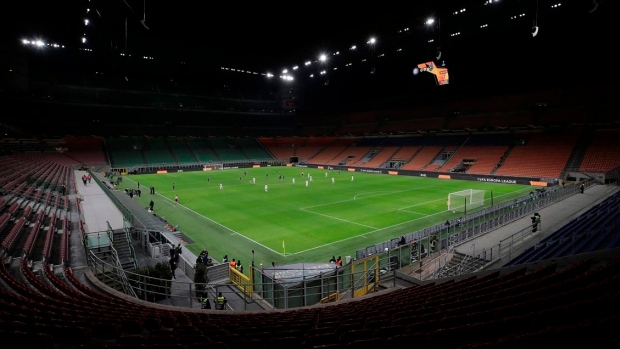 ROME — Serie A played on Sunday despite calls from Italy’s sports minister and players’ association president to suspend the games in Italy’s top soccer division.

Parma-Spal, the first match of the day, kicked off after a 75-minute delay inside an empty stadium as officials considered an appeal from sports minister Vincenzo Spadafora minutes before the scheduled start.

“It doesn’t make sense right now, when we’re requesting enormous sacrifices of our citizens in order to stop the spread of contagion, to put at risk the health of the players, referees, coaches and fans -- who will surely get together to watch the games, just not to temporarily suspend soccer and damage all the interests that surround the game.” Spadafora said.

“I think (soccer federation president Gabriele) Gravina should have some additional consideration without waiting for the first case of contagion, before assuming this serious responsibility,” Spadafora added.

The Italian league replied that it was following government orders to hold games in empty stadiums.

“The repeated and contrasting government statements only add to the general state of confusion and definitely don’t help the system overcome the difficult time caused by the virus,” a league statement said.

The players' association was considering a strike, the Gazzetta dello Sport reported.

“The leagues should be stopped,” a players’ association statement said. “It’s dangerous to travel from and to the danger zones, it’s dangerous to play soccer, it’s dangerous to embrace each other. The teams unfortunately are going out onto the field today due to those who don’t have the courage to decide that soccer can’t be an exception against the coronavirus.”

The players’ association added that it expects “one thing only” at a soccer federation board meeting Tuesday: “The suspension of the leagues until the conditions improve enough to play.”

Striker Mario Balotelli, who plays for Brescia in the Lombardy region hit hardest by the virus, questioned why the games were being played in an Instagram story.

“Playing means travelling by bus, train, airplane, sleeping in hotels, coming into contact with other people outside your club,” Balotelli wrote. “You can’t joke around with your health.”

Five Serie A matches were scheduled for Sunday, beginning with Parma vs. Spal at lunchtime and concluding with Juventus vs. Inter Milan in the evening. All of the matches had already been postponed from last weekend.

An appeal by Spadafora for this weekend’s games to be shown on free TV “considering the serious inconvenience affecting the population in this difficult time" was rejected by the league.

“The minister has gone from asking for the games to be show for free to suspending the league, amid a decree to play behind closed doors,” Cagliari president Tommaso Giulini said. “Italy needs clarity and gravitas right now, not populist proclamations.”

Parma and Spal players were ready to come onto the field at Ennio Tardini stadium in Parma when they received the news of Spadafora’s call for a suspension. The players then turned around and returned to their changing rooms.

Substitutes, who were already on the bench, also got up and rejoined their teammates in the changing rooms.

Then 45 minutes later, the players came back out to warm up again and the match eventually began. Relegation-threatened Spal won 1-0.

Workers inside the stadium wore masks over their faces, while streaming service DAZN showed the game with commentary from announcers based inside a Milan studio.

Italy announced a sweeping quarantine early Sunday for its northern regions, igniting travel chaos as it restricted the movements of a quarter of its population in a bid to halt the new coronavirus' relentless march across Europe.

Shortly after midnight, Italian Prime Minister Giuseppe Conte signed a decree affecting 16 million people in the country's prosperous north, including the Lombardy region and at least 14 provinces in neighbouring regions. The extraordinary measures will be in place until April 3.

Italy on Saturday reported its biggest daily increase in coronavirus cases since its outbreak began on Feb. 21. The number of infected people rose 1,247 in the previous 24 hours, taking the total to 5,883. Italy’s death toll rose to 233.