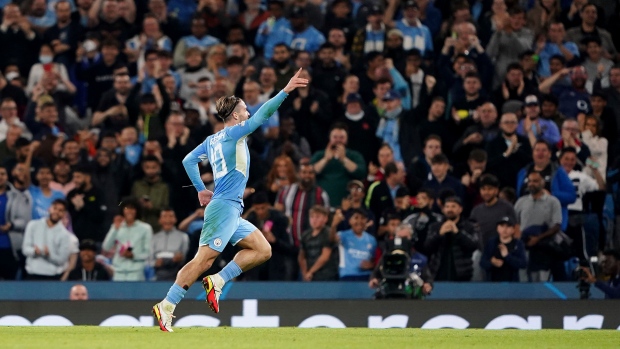 MANCHESTER, England (AP) — Jack Grealish marked his Champions League debut with the pick of the goals in Manchester City’s wild 6-3 win over Leipzig, whose forward Christopher Nkunku scored a hat trick in vain in the teams’ opening group-stage match on Wednesday.

Getting the chance to play on the biggest stage in European club soccer was one of the main reasons given by Grealish for making the move to City from boyhood club Aston Villa in the offseason for a British-record free of $139 million, and the England international looked at home at that level.

Grealish’s goal in the 56th minute was the highlight of an entertaining and open game at Etihad Stadium, the midfielder picking up a loose ball on the left and cutting into the area before curling a shot high into the corner.

That made it 4-2 and after Nkunku slotted home from a tight angle to complete his hat trick and give Leipzig hope of a point, goals by Joao Cancelo — a long-range effort — and Gabriel Jesus secured victory.

Leipzig finished with 10 men after the sending off of Angelino, the left back signed from City, for two yellow cards.

Aside from some uncharacteristically sloppy defending, City was irresistible at times in the first match of its latest bid to win an elusive Champions League title, having got closer than ever last season with a loss to Chelsea in the final in Porto in May.

Nathan Ake’s header from Grealish’s corner put City ahead in the 16th before Leipzig defender Nordi Mukiele tried to cushion a header back to the keeper from Kevin De Bruyne’s right-wing cross, only to put it into his own net in the 28th.

Nkunku headed in from close range to make it 2-1 in the 42nd but Riyad Mahrez regained a two-goal lead for City by converting a penalty in first-half stoppage time after Lukas Klostermann blocked a header by Ferran Torres with his hand.

Nkunku brought the German team back into the game again by heading home Dani Olmo’s deft chip into the area past Ederson.

Completing the first Champions League hat trick by a Leipzig player couldn’t stop the visitors falling to another heavy loss in Manchester, after a 5-0 thrashing by Manchester United in last season’s competition.