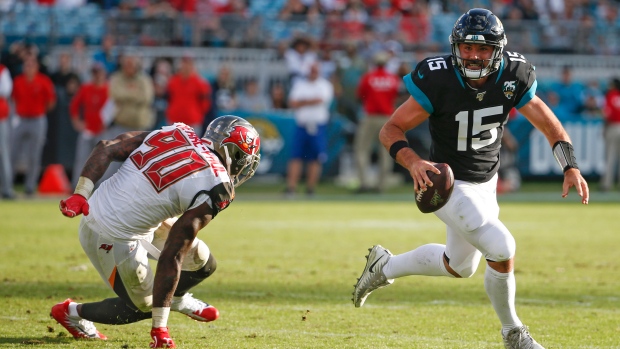 Gardner Minshew (15) scrambles away from Jason Pierre-Paul , The Canadian Press

Coach Doug Marrone made the announcement Monday, one day after a 28-11 home loss to Tampa Bay in which the Jaguars (4-8) managed 242 yards, turned the ball over four times and were flagged a season-high 16 times for 125 yards. It was the team's 18th loss in its past 24 games.

Minshew, who went 4-4 as the starter while Foles recovered from a broken left collarbone suffered in the opener, rallied the team and had a chance to make it a seven-point game in the fourth quarter. But his would-be TD pass slipped through Dede Westbrook’s hands and resulted in an interception.