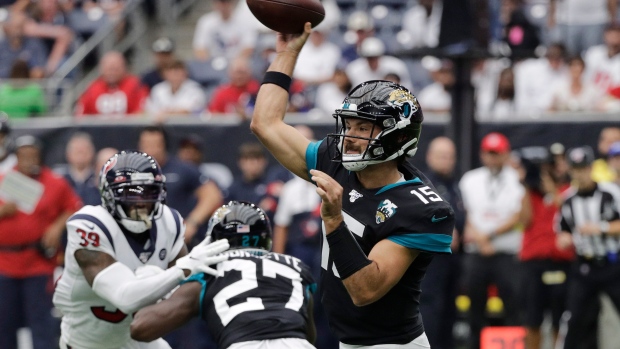 JACKSONVILLE, Fla. — There are two games Jacksonville Jaguars defensive end Yannick Ngakoue would like to erase from his resume — and his memory.

Both against Tennessee. Both in prime time. Both lopsided losses.

Jacksonville would like to end the trend at home Thursday night.

Tennessee has won four in a row and six of seven in the series, allowing a combined 41 points during the winning streak.

Derrick Henry got the Titans rolling in the most recent beat-down, breaking four tackles on his way to the second 99-yard run in NFL history (Tony Dorsett, 1983). The 247-pound Henry sidestepped two defenders at the line of scrimmage, cut outside, stiff-armed cornerback A.J. Bouye and then tossed Leon Jacobs to the ground. Fellow linebacker Myles Jack had a final chance to knock Henry out of bounds around the 20-yard line, but failed to get it done.

Henry finished with 238 yards and four touchdowns on 17 carries, but only one of those will be remembered.

The play ranked No. 89 in the NFL's "100 Greatest Plays" list recently released. It surely will be shown again during the broadcast Thursday.

Henry, though, would rather be done with it.

"I am tired of seeing it," said Henry, who grew up near Jacksonville in Yulee. "I know for sure they are."

Jaguars defensive co-ordinator Todd Wash opted to keep the clip out of film study this week.

"We don't need to watch that again," Wash said. "I see it on NFL Network all the time. My wife always brings it up. 'That wasn't a very good play.' I'm like, 'Mr. Obvious, right?' ... The bottom line is he made a play. Give credit to him, but we have to do a better job of stopping it this time."

Even Henry has moved on.

The Jaguars hope to say the same about their losing ways — overall and in the series.

Jacksonville has dropped 12 of its past 14 games and is 0-2 for the first time in coach Doug Marrone's three years.

The Jaguars need a victory to salvage an awful start that included losing quarterback Nick Foles (broken collarbone) for at least two months and then having their best player, cornerback Jalen Ramsey, request a trade following a sideline argument with Marrone.

Here are some other things to know about the game:

Jaguars cornerback Jalen Ramsey walked out of practice Wednesday, stopped at one of the team golf carts, grabbed his cellphone and made a call. It appeared as if he was checking on the status of his trade request.

Marrone also said he and Ramsey spoke for the first time since their sideline spat during Sunday's 13-12 loss at Houston.

"It's like anything else in this profession: It's behind us now," Marrone said. "His focus is on playing and doing the best job for his teammates, and my job is to do the best for the team. That's behind us right now."

The Titans lead the NFL in turnover margin, with five takeaways and no turnovers. It's their best start in the category since 2013.

Tennessee was the least-penalized team in the NFL last season and is off to another strong start. The Titans have a league-low 11 penalties through two games. That ties them with Pittsburgh, Carolina and Indianapolis for the fewest. Since the start of the 2018 season, the Titans have only 93 penalties — 10 fewer than the next closest team.

Jaguars left tackle Cam Robinson (knee) will make his season debut, sending second-year pro Will Richardson to the bench. Richardson is expected to get some snaps at right guard while alternating series with A.J. Cann.