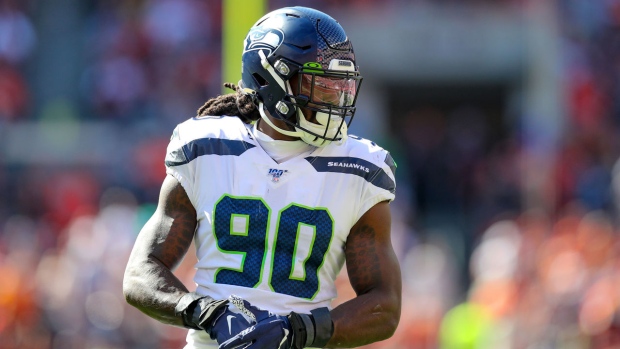 Free agent defensive end Jadeveon Clowney said he hasn't ruled out a return to the Seattle Seahawks after spending last season with the team.

"I loved Seattle when I was there this past season, Clowney told FOX 26 in Houston. "I love everybody on the coaching staff ... I hope we can work something out, if anything happened, I did like it up there."

Free agent DE Jadeveon Clowney (@clownejd) working at @PlexAthlete in Houston: “Whoever I sign with is gonna get the best version of me..I know what I got to do to get where I need to get.” (Hasn’t ruled out the @Seahawks): “I love Seattle..I love everybody on the coaching staff” pic.twitter.com/Al0dbbKQcG

Clowney played in 13 games with 11 starts for the Seahawks last season, recording 31 tackles, three sacks, and seven tackles for a loss.

The 27-year-old, who battled through a sports hernia last season, also said he thinks the ongoing COVID-19 pandemic has slowed his free agency because teams can't get a look at him in person to see how he's recovered from February surgery.

"I don't know if people think I'm hurt because of what I went through (with) the core, or previous years ... but I just want to let people know I'm ready. I'll be ready to go whenever the time comes and whoever I sign with will get the best version of me."

Prior to his one season in Seattle, Clowney played five years with the Houston Texans, and was named to the Pro Bowl the final three. The first overall pick of the 2013 NFL Draft has 236 tackles and 32 sacks in 75 career games.