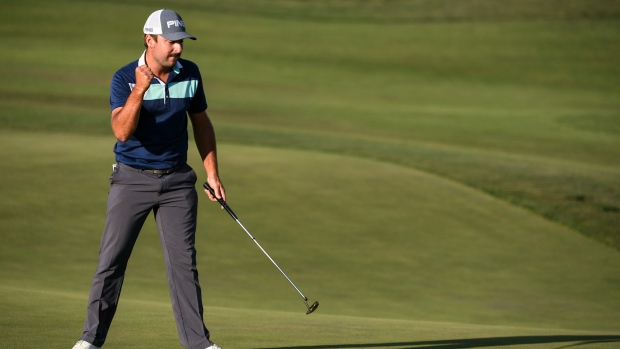 HAYWARD, Calif. — Stephan Jaeger backed up his record 12-under 58 with a 65 on Friday, giving him a five-stroke lead halfway through the Web.com Tour's Ellie Mae Classic.

The 27-year-old German player matched the lowest score ever on a substantial tour Thursday with the 58. Japan's Ryo Ishikawa also shot a 12-under 58 to win the 2010 Crowns on the Japan Tour. Jaeger broke the Web.com Tour record of 59, and set another tour record Friday with his 17-under 123 total.

"I don't know about all those records, but I'd love to get the tournament scoring record at the end of the week," Jaeger said. "It's a long time to go to think about that stuff. I've got two more days. I just want to keep playing how I am, keep giving myself opportunities, and getting hot at the right moments and making putts. It's just another day of golf tomorrow. If I can get another good round tomorrow, it'll make it a little easier on Sunday, but we'll see."

On Friday at TPC Stonebrae, Jaeger bogeyed the first hole and birdied Nos. 8-10 and 15-17.

"You never know how you're going to start after a round like this," Jaeger said. "It's a brand new day. You can start out cold like I did or you can come out red hot. "I was playing good, got a couple of bad lies, but kept playing good, giving myself opportunities. I'm very, very happy with the score. I'm very happy with how I played, and how I dealt with it so far."

Jaeger came to the United States as a foreign exchange student in 2006. He went to high school for two years in Chattanooga, Tennessee, and played in college at Tennessee-Chattanooga, where he was a three-time Southern Conference player of the year.

Former California star Brandon Hagy and Rhein Gibson were tied for second. Hagy had a 63, and Gibson shot 66.

"If you had said I'd be at 12 under after two rounds, I'd have been pretty stoked," Gibson said. "I'm in a good position, and hopefully Jaeger doesn't get too far ahead. But still, 36 holes left and just try to keep doing what I'm doing."