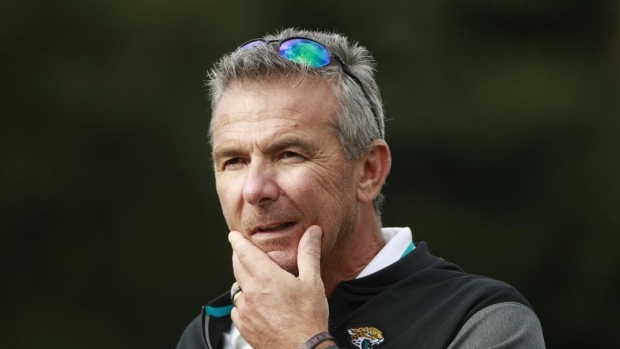 The last time he did, Meyer ended up embarrassing the franchise and drawing a public reprimand from owner Shad Khan after videos surfaced of the coach's behavior in an Ohio bar.

Meyer, speaking outside London ahead of Sunday's game against the Miami Dolphins, had opted not to fly back with his winless team following Jacksonville’s 24-21 loss at Cincinnati on Sept. 30, a Thursday night. It's a highly unusual move for any coach, but Meyer said Friday that he had given the players three days off and his coaches two days off after the loss. He said he stayed in Ohio to visit his grandsons.

“Yeah, I look back now ... I talked to our GM about it. It didn’t seem like a big deal, but yeah that’s something I won’t do,” Meyer said Friday.

Instead of joining his team on the flight, Meyer remained in his home state of Ohio to see family members and went to dinner that Friday at his restaurant/bar in Columbus, Urban Meyer’s Pint House.

The first video shows a young woman dancing between the 57-year-old Meyer’s legs as he was sitting on a bar stool. The second, taken from a different angle, shows Meyer’s right hand on or near her bottom.

Khan publicly reprimanded Meyer for the coach’s “inexcusable” behavior and said Meyer must “regain our trust and respect.” Meyer had earlier apologized to his family, his team and Khan for actions he called “just stupid.”

The Jaguars slipped to their 20th consecutive loss in a 37-19 defeat to the Tennessee Titans last Sunday.

Rookie quarterback Trevor Lawrence expressed confidence in Meyer on Friday when asked about the coach rebuilding trust in the locker room.

“He’s done a good job of handling the situation. Obviously he’s had conversations with the team and one on one, all of us,” Lawrence said. “Just him being the same guy, coming to work. Super hard worker, really cares about this team. No one can deny that. We’re in a good spot and we all respect him, and we’re just ready to go win some games.”

Meyer said he has spoken to Khan “several times” and that he's working on rebuilding trust with the team.

“We’re focused on making steady improvement, which you’ve seen certainly on offense. ... Consistent effort, improvement and then try to go win a game. How do you earn trust? Over time — time and just being around them,” Meyer said.

As Jacksonville edges closer to Tampa Bay's NFL-record 26 consecutive losses, the longtime college coach who made the jump to the NFL this season downplayed a question about whether he personally has a lot at stake Sunday.

“I don’t look at anything personally,” Meyer said. “I look at our team and how hard they’ve worked and how close they’ve come and the improvements we’ve made. ... but I don’t look at everything by myself. We have a heck of a locker room and the guys are working their tails off.”

Rookie QBs fell to 0-5 in London when Zach Wilson and the New York Jets lost 27-20 to the Atlanta Falcons last Sunday at Tottenham Hotspur Stadium, which also hosts Sunday's “home” game for Jacksonville.

Lawrence, the No. 1 pick in the NFL draft, continues to improve, however. He completed 23 of 33 passes for 273 yards and a touchdown against the Titans. He also ran for a score. His lone interception came on the final snap.

“The last two weeks, our offense has played our two best games,” Lawrence said. "And we still can play better, but you see the yards and the big plays. We’re scoring more points, getting more opportunities in the red zone. That’s just coming from us all kind of clicking.”

The 22-year-old QB said he's already clicked with backup center Tyler Shatley, who will replace the injured Brandon Linder. He called Shatley “one of the smartest players we have."

Lawrence has been sacked only eight times and Meyer credited the offensive line as "probably the most consistent part of our team.”

James Robinson ran for a career-high 149 yards on 18 carries and a touchdown against the Titans. Only Derrick Henry, Nick Chubb and Ezekiel Elliott have rushed for more yards this season.

NOTES: Starting LB Myles Jack (back) did not make the trip. CB Tyson Campbell (toe) and DL Roy Robertson-Harris (ankle) were limited in practice Friday and were listed as questionable for Sunday. ... Kickers Josh Lambo and Matthew Wright both made the trip. Meyer said he knows who will suit up but wanted to “visit with them before I announce anything.” ... Lawrence said his only other foreign trip was to Mexico. ... The Jags are 3-4 in London games, all at Wembley Stadium. The last time out, in 2019, Minshew Mania fizzled when quarterback Gardner Minshew had four turnovers in a 26-3 loss to the Houston Texans. ... London Mayor Sadiq Khan told The Associated Press on Thursday that “the dream” remains to bring an NFL franchise to London and that he hopes it’s the Jags: “I’m sure they would say they get a better home reception here than in Florida."