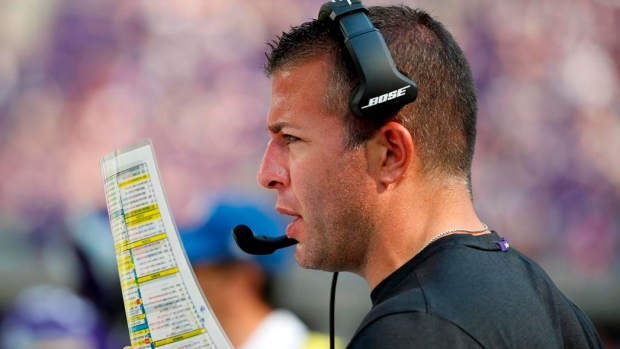 JACKSONVILLE, Fla. — Gardner Minshew was as good as any rookie quarterback in the NFL. Running back Leonard Fournette had a career year. And second-year pro DJ Chark became a weekly threat to defences.

It wasn't enough to save John DeFilippo's job.

The Jacksonville Jaguars fired DeFilippo after one season Monday, becoming the second team to part with him in the last 13 months. Coach Doug Marrone made the decision the day his assistants returned from a brief break following the regular-season finale.

Marrone is expected to keep everyone else on his staff. Finding a replacement for DeFilippo could be tough given it seems to be a playoffs-or-overhaul season in Jacksonville.

Owner Shad Khan kept Marrone and general manager Dave Caldwell despite public calls for a complete reboot, and Khan made it clear that expectations would be high. Marrone and Caldwell have two years remaining on their contracts.

So Marrone will have to persuade someone to join his staff knowing it could be a one-and-done situation. He also has to replace quarterbacks coach Scott Milanovich and assistant running backs coach John Donovan. Milanovich left to become the head coach of the CFL's Edmonton Eskimos. Donovan returned to the college ranks as Washington's offensive co-ordinator.

DeFilippo will now be looking for his third job in as many years. Minnesota fired him in December 2018 after less than one year on the job. He landed in Jacksonville and was reunited with quarterback Nick Foles.

“Flip” was Foles' quarterback coach in Philadelphia in 2017, the season in which the Eagles won the Super Bowl. Foles was the MVP of the title game.

They were supposed to help Jacksonville escape its seemingly annual spot near the bottom of the league in offence. But Foles broke his left collarbone on the team's 11th play of the opener, missed the next eight games and was benched in early December.

Minshew emerged as a potential star, going 6-6 in 12 starts while putting up numbers that rival top-10 picks Kyler Murray of Arizona and Daniel Jones of the New York Giants. Fournette and Chark, meanwhile, gave the franchise its first 1,000-yard rusher and 1,000-yard receiver in the same season since 2004.

Still, the Jaguars (6-10) ranked 20th in the league in total offence and 26th in scoring. The offence rarely looked smooth, and Fournette openly criticized the play calling at times.

It appears Jacksonville is ready to stick with Minshew as its starter, with Foles serving as a high-priced backup in 2020.

“I give Gardner a ton of credit for what he did, where he came from, how he handled his business,” Caldwell said a few days after the regular season. "He got thrust in there Week 1. ...

“He won more games than any other rookie quarterback, and, statistically in less games, put himself in contention for Offensive Rookie of the Year. He did a really nice job. ... I don’t think any decision has been made (on a starter), as to what that’s going to look like, but we feel good about Gardner and moving forward with him.”