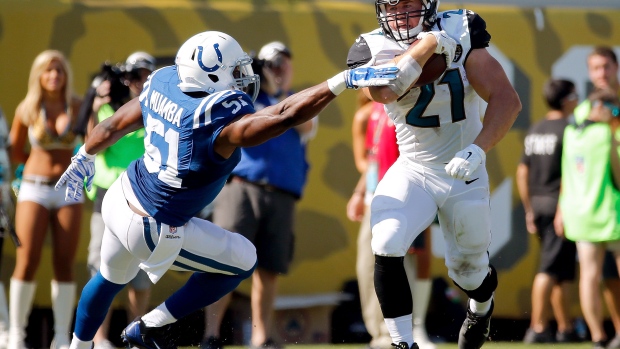 Signed in the off-season to replace Maurice Jones-Drew, Gerhart re-injured his foot in the first quarter of Sunday's 17-9 loss to Pittsburgh. He practiced Wednesday, but sat out Thursday and Friday.

"I have all the respect for Toby," Bradley said. "He really wants to play, but after talking to the doctors and the trainers and as coaches, we just stepped in saying, 'Let's give you this week off so you can stay off of it.' We will hopefully accelerate it and we're not dealing with it from week to week.

"It's tough on him. I know the team holds him in such high regard because of who he is and what he's battling, but I think this is truly best for us and best for the team."

Gerhart has 48 carries for 123 yards and a touchdown this season. He ranks near the bottom of the league in yards per carry, averaging 2.6, and has been slowed since injuring his foot and ankle during a horse-collar tackle in the season opener at Philadelphia.

Bradley declined to name a starter, saying it would depend on what formation the offence opens in Sunday.

The team has raved about Johnson in recent weeks, saying the seventh-round draft pick from UCF has natural running ability and lots of upside.

"I think that you will see all three of them have a chance to play in different roles," Bradley said. "It does create opportunities. It is that cliché 'next man up,' so it will give more opportunities to D-Rob and Todman and Storm. All three will be utilized."

Johnson led the Jaguars with 24 yards rushing against the Steelers.

"He came back and had a really good week this week," Bradley said. "I think that the more reps he gets in practice, the more accustomed he gets. He's doing some really good things in practice."